The dam that held back iron ore waste collapsed Friday, burying company buildings and inundating part of the small Brazilian city of Brumadinho. 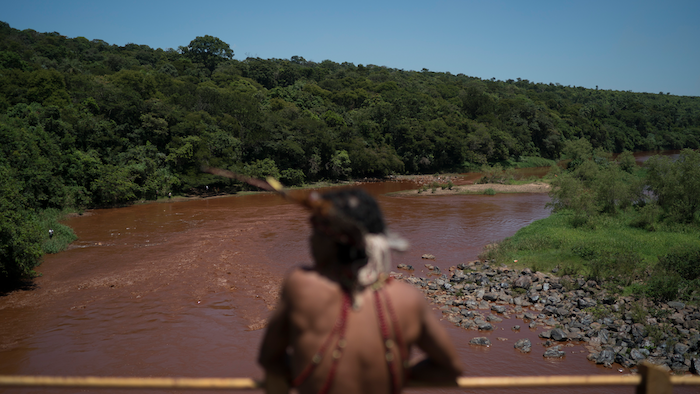 Hayo, chief of the Pataxo Ha-ha-hae indigenous community, stands over the Paraopeba River on a rail bridge near his village in Brumadinho, Brazil, Tuesday, Jan. 29, 2019.
AP Photo/Leo Correa

Authorities arrested five people Tuesday in connection with the collapse of a Brazilian mine dam, while the death toll rose to at least 84 and the carcasses of fish floated along the banks of a river downstream that an indigenous community depends on for food and water.

The dam that held back iron ore waste, owned and operated by big mining company Vale SA, collapsed Friday, burying a company cafeteria and other Vale buildings and inundating part of the small southeastern city of Brumadinho.

Grieving relatives buried some of the victims in Brumadinho and rescue teams continued a delicate search through swaths of muck for more victims or survivors.

Lt. Flavio Godinho of the Minas Gerais state civil defense agency said Tuesday evening that the number of confirmed dead had risen to 84 from 65. He said the number of missing stood at 276.

The dead fish and trash were seen by a reporting team for The Associated Press about 18 kilometers (11 miles) downstream from the dam along the banks of the Paraopeba River.

The Pataxo Indians living alongside the river who use it to fish, bathe and gather water for the plants they cultivate as food were told by Brazilian environmental officials that they should no longer do so, said Hayo, the village chief who goes by one name.

"We used the river to take baths, to fish, to water our plants and now we can't do any of that," said Hayo, wearing a large feathered headdress and a red and black-beaded necklace. "We can't even water our plants because they say it damages the soil."

Two agents with the Brazilian Institute of Environment and Renewable Natural Resources, the country's environmental enforcement agency, took water samples and talked with tribe members but said they were not authorized to speak about their findings.

In a statement sent to The Associated Press on Tuesday, the agency said it asked Vale to "remove the dead fish, which are having an impact on the indigenous population."

The statement gave no details about the water tests and did not say whether tribal members had been told the water was unhealthy.

The signs of possible ecological consequences came as the arrests of company workers with links to the dam were made in Sao Paulo and in the state of Minas Gerais.

Three of the arrested worked for Vale, the company said, adding that it was cooperating with investigating authorities.

A German company that has inspected the dam said two of its employees were arrested. The Munich-based TUEV Sued company declined to specify whether the arrested staff were from its German headquarters or its Brazilian branch.

In ordering the arrests, Minas Gerais state judge Perla Saliba Brito wrote that the disaster could have been avoided.

It's not believable that "dams of such magnitude, run by one of the largest mining companies in the world, would break suddenly without any indication of vulnerability," the judge wrote in the decision, according to news portal UOL.

Authorities said the five will be detained for 30 days while officials investigate possible criminal responsibility.

At a cemetery in Brumadinho, 15 freshly dug graves awaited the remains of some of those killed.

Wailing in grief at the cemetery was the wife of Edgar Carvalho Santos, one of the mining company's workers whose body has been found.

Friends and family members prevented reporters from approaching the woman.

One woman told Santos' wife that "this was not a tragedy, it's a crime." It was a sign of the growing anger directed at Vale over the disaster.

Vale is the world's largest producer of iron ore, which is the raw ingredient for steel.

The company is one of Brazil's largest businesses and a key employer in Brumadinho, but many residents have complained that a siren which should have gone off to warn people to evacuate never sounded Friday.

Military police Col. Evandro Borges told reporters that most of the people missing were Vale employees.

Many employees were eating lunch when the dam collapsed, burying a cafeteria and other company buildings.