Ships sail beneath the Eugene Talmadge Memorial Bridge to reach the Port of Savannah. 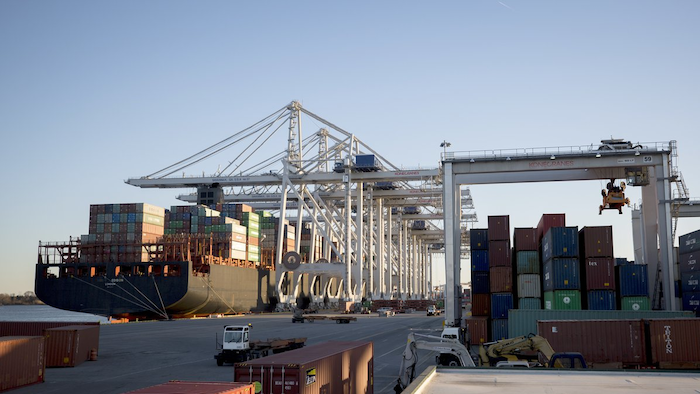 Cranes at the Port of Savannah load and unload containers Jan. 30, 2018.
Associated Press

Georgia will need to replace the Eugene Talmadge Memorial Bridge that spans the Savannah River in the next decade to make room for larger cargo ships to sail beneath the span to reach the Port of Savannah, the state's top ports official said Thursday.

Griff Lynch, executive director of the Georgia Ports Authority, broke the news in his annual "State of the Ports" speech as he outlined $2.5 billion in expansion plans to grow Savannah's capacity to handle containerized cargo 45 percent by the year 2028.

"We have a bridge that cannot handle these ships," Lynch told about 1,400 people gathered in a Savannah ballroom. "We need to start planning the relief of the Talmadge Bridge. And when I say relief, I mean replacement."

The current suspension bridge over the river dividing Georgia and South Carolina was completed in 1991 for $71 million. It was built after some cargo ships clipped the previous bridge, built in 1954. Lynch gave no estimate for what a new, taller span might cost.

The Talmadge Bridge made headlines earlier this year because of efforts to change its name. It was named in the 1950s for former Gov. Eugene Talmadge, a segregationist Democrat who served three terms between 1933 and 1942. City officials in Savannah and the Girl Scouts nationally pressed Georgia lawmakers to rename the bridge but were unsuccessful.

A new bridge was one of the needs Lynch mentioned Thursday to meet explosive growth at the Port of Savannah, the fourth-busiest U.S. port for cargo shipped in containers — large metal boxes used to transport retail goods from consumer electronics to frozen chickens. In the fiscal year that ended June 30, Savannah handled a record 4.2 million container units of imports and exports. The port handled 3 million units for the first time just four years earlier.

Lynch says the port plans to increase its fleet of ship-to-shore cranes from 30 to 42 in the next decade, expand its gates to increase the number of trucks that can pick up and drop off cargo daily and add storage room for cargo containers at the port terminal. Those and other changes will grow Savannah's capacity for handling containers from 5.5 million units annually to 8 million.

The port authority has had preliminary talks with Gov. Nathan Deal's office and other state officials, Lynch said.

"They were very supportive, as we've seen in every major project the Georgia Ports Authority has taken on," Lynch said. "The fact is this bridge is critical to our future. It's got to be the right size."