It's attached to a motorized, gelatin-based eyelid. 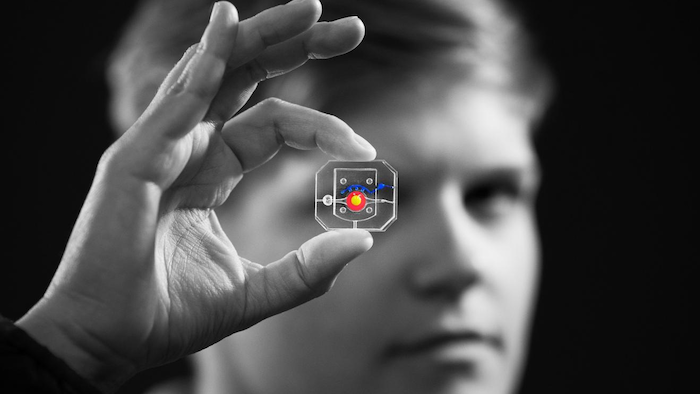 Rachel Young, a graduate student in Huh's lab, holds up their new eye-on-a-chip device. The latest iteration of the lab's eye-on-a-chip has a mechanical eyelid to simulate blinking, and was used to test an experimental drug for dry eye disease. By incorporating human cells into an engineered scaffolding, the eye-on-a-chip has many of the benefits of testing on living subjects, while minimizing risks and ethical concerns.
University of Pennsylvania

People who spend eight or more hours a day staring at a computer screen may notice their eyes becoming tired or dry, and, if those conditions are severe enough, they may eventually develop dry eye disease (DED). DED is a common disease with shockingly few FDA-approved drug options, partially because of the difficulties of modeling the complex pathophysiology in human eyes.

This eye-on-a-chip, complete with a blinking eyelid, is helping scientists and drug developers to improve their understanding and treatment of DED, among other potential uses. The research, published in Nature Medicine, outlines the accuracy of the eye-on-a-chip as an organ stand-in and demonstrates its utility as a drug testing platform. 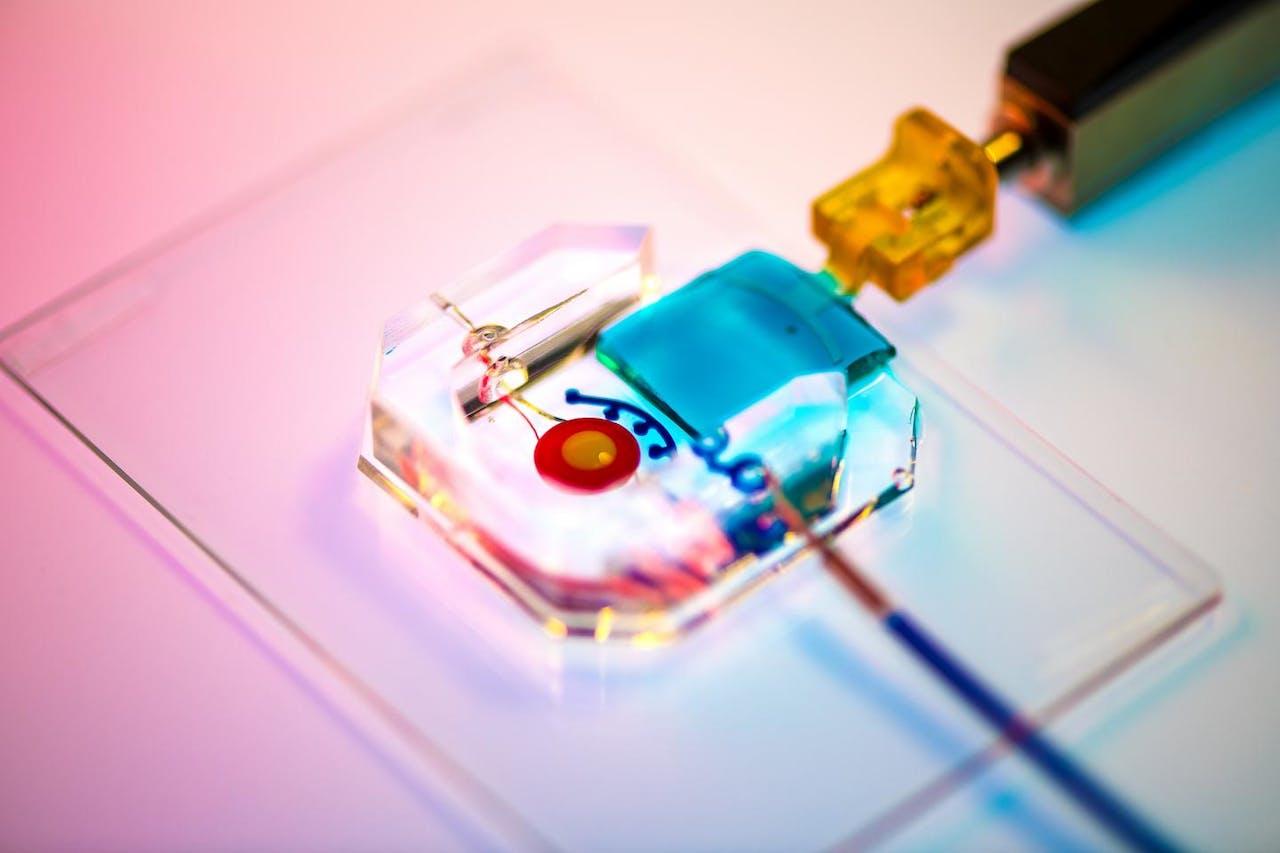 The Huh lab's eye-on-a-chip attached to a motorized, gelatin-based eyelid. Blinking spreads tears over the corneal surface, and so was a critical aspect to replicate in the researchers' model of dry eye disease. cells. The cells of the cornea grow on the inner circle of scaffolding, dyed yellow, and the cells of the conjunctiva grow on the surrounding red circle. Artificial tears are supplied by a tear duct, dyed blue.University of Pennsylvania

The study was led by Dan Huh, associate professor in the Department of Bioengineering, and graduate student Jeongyun Seo.

They collaborated with Vivian Lee, Vatinee Bunya and Mina Massaro-Giordano from the Department of Ophthalmology in Penn's Perelman School of Medicine, as well as with Vivek Shenoy, Eduardo D. Glandt President's Distinguished Professor in Penn Engineering's Department of Materials Science and Engineering. Other collaborators included Woo Byun, Andrei Georgescu and Yoon-suk Yi, members of Huh's lab, and Farid Alisafaei, a member of Shenoy's lab.

Huh's lab specializes in creating organs-on-a-chip that provide microengineered in vitro platforms to mimic their in vivo counterparts, including lung and bone marrow proxies launched into space this May to study astronaut illness. The lab has spent years fine-tuning its eye-on-a-chip, which earned them the 2018 Lush Prize for its promise in animal-free testing of drugs, chemicals, and cosmetics.

In this study, Huh and Seo focused on engineering an eye model that could imitate a healthy eye and an eye with DED, allowing them to test an experimental drug without risk of human harm.

To construct their eye-on-a-chip, Huh's team starts with a porous scaffold engineered with 3D printing, about the size of a dime and the shape of a contact lens, on which they grow human eye cells. The cells of the cornea grow on the inner circle of scaffolding, dyed yellow, and the cells of the conjunctiva, the specialized tissue covering the white part of human eyes, grow on the surrounding red circle. A slab of gelatin acts as the eyelid, mechanically sliding over the eye at the same rate as human blinking. Fed by a tear duct, dyed blue, the eyelid spreads artificial tear secretions over the eye to form what is called a tear film.

"From an engineering standpoint, we found it interesting to think about the possibility of mimicking the dynamic environment of a blinking human eye. Blinking serves to spread tears and generate a thin film that keeps the ocular surface hydrated. It also helps form a smooth refractive surface for light transmission. This was a key feature of the ocular surface that we wanted to recapitulate in our device," says Huh.

For people with DED, that tear film evaporates faster than it's replenished, resulting in inflammation and irritation. A common cause of DED is the reduced blinking that occurs during excessive computer usage, but people can develop the disease for other reasons as well. DED affects about 14 percent of the world's population but has been notably difficult to develop new treatments for, with 200 failed clinical drug trials since 2010 and only two currently available FDA-approved drugs for treatment.

Huh's lab has been considering the drug-testing potential of organs-on-a-chip since their initial conceptualization, and, because of its surface-level area of impact, DED seemed the perfect place to start putting their eye model to the test. But before they started a drug trial, the team had to ensure their model could really imitate the conditions of DED.

"Initially, we thought modeling DED would be as simple as just keeping the culture environment dry. But as it turns out, it's an incredibly complex multifactorial disease with a variety of sub-types," Huh says. "Regardless of type, however, there are two core mechanisms that underlie the development and progression of DED. First, as water evaporates from the tear film, salt concentration increases dramatically, resulting in hyperosmolarity of tears. And second, with increased tear evaporation, the tear film becomes thinner more rapidly and often ruptures prematurely, which is referred to as tear film instability. The question was: Is our model capable of modeling these core mechanisms of dry eye?"

The answer, after much experimentation, was yes. The team evoked DED conditions in their eye-on-a-chip by cutting their device's artificial blinking in half and carefully creating an enclosed environment that simulated the humidity of real-life conditions. When put to the test against real human eyes, both healthy and with DED, the corresponding eye-on-a-chip models proved their similarity to the actual organ on multiple clinical measures. The eyes-on-a-chip mimicked actual eyes' performance in a Schirmer strip, which tests liquid production; in an osmolarity test, which looks at tear film salt content; and in a keratography test, which evaluates the time it takes for a tear film to break up.

Having confirmed their eye-on-a-chip's ability to mirror the performance of a human eye in normal and DED-inducing settings, Huh's team turned to the pharmaceutical industry to find a promising DED drug candidate to test-drive their model. They landed on an upcoming drug based on lubricin, a protein primarily found in the lubricating fluid that protects joints.

"When people think of DED, they normally treat it as a chronic disease driven by inflammation," says Huh, "but there's now increasing evidence suggesting that mechanical forces are important for understanding the pathophysiology of DED. As the tear film becomes thinner and more unstable, friction between the eyelids and the ocular surface increases, and this can damage the epithelial surface and also trigger adverse biological responses such as inflammation. Based on these observations, there is emerging interest in developing ophthalmic lubricants as a topical treatment for dry eye. In our study, we used an lubricin-based drug that is currently undergoing clinical trials. When we tested this drug in our device, we were able to demonstrate its friction-lowering effects, but, more importantly, using this model we discovered its previously unknown capacity to suppress inflammation of the ocular surface."

By comparing the testing results of their models of a healthy eye, an eye with DED, and an eye with DED plus lubricin, Huh and Seo were able to further scientists' understanding of how lubricin works and show the drug's promise as a DED treatment.

Similarly, the process of building a blinking eye-on-a-chip pushed forward scientists' understanding of the eye itself, providing insights into the role of mechanics in biology. Collaborating with Shenoy, director of the Center for Engineering MechanoBiology, the team's attention was drawn to how the physical blinking action was affecting the cells they cultivated to engineer an artificial eye on top of their scaffolding.

"Initially, the corneal cells start off as a single layer, but they become stratified and form multiple layers as a result of differentiation, which happens when these cells are cultured at the air-liquid interface. They also form tight cell-cell junctions and express a set of markers during differentiation," Huh says. "Interestingly, we found out that mechanical forces due to blinking actually help the cells differentiate more rapidly and more efficiently. When the corneal cells were cultured under air in the presence of blinking, the rate and extent of differentiation increased significantly in comparison to static models without blinking. Based on this result, we speculate that blink-induced physiological forces may contribute to differentiation and maintenance of the cornea."

In other words, human cornea cells growing on the scientists' scaffold more quickly became specialized and efficient at their particular jobs when the artificial eyelid was blinking on top of them, suggesting that mechanical forces like blinking contribute significantly to how cells function. These types of conceptual advances, coupled with drug discovery applications, highlight the multifaceted value that engineered organs-on-a-chip can contribute to science.

Huh and Seo's eye-on-a-chip is still just dipping its toes into the field of drug testing, but this first step is a victory that represents years of work refining their artificial eye to reach this level of accuracy and utility.

"Although we have just demonstrated proof-of-concept," says Seo, "I hope our eye-on-a-chip platform is further advanced and used for a variety of applications besides drug screening, such as testing of contact lenses and eye surgeries in the future."

"We are particularly proud of the fact that our work offers a great and rare example of interdisciplinary efforts encompassing a broad spectrum of research activities from design and fabrication of novel bioengineering systems to in vitro modeling of complex human disease to drug testing," says Huh. "I think this is what makes our study unique and representative of innovation that can be brought about by organ-on-a-chip technology."