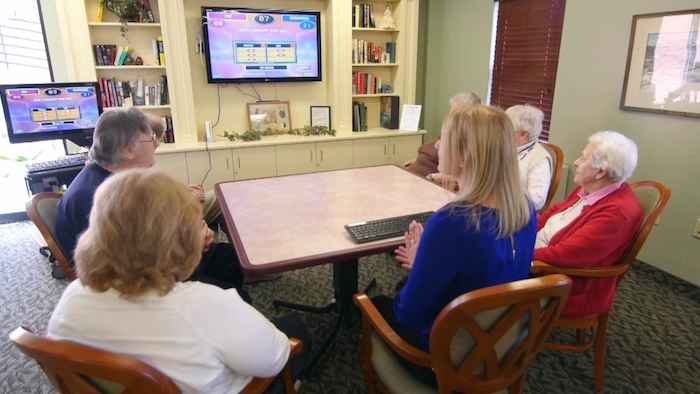 The system, known as "iN2L" or "It's Never 2 Late," is a picture-based, touch-screen interface with more than 4,000 pieces of easily accessible content geared toward seniors interested in using a computer, regardless of their background and physical or intellectual abilities.

The Renaissance, which has assisted-living, memory-care and respite services, is the only senior-living community in the region using the iN2L system, Jacob Bonagofski, life enrichment director at The Renaissance, told The Spokesman-Review .

When The Renaissance installed the iN2L system in common areas of its five homes in January, residents enjoyed playing games such as Family Feud so much they requested it in their rooms, Bonagofski said.

"That's the biggest question we get is, 'Can we get it in our room, or can we put it on our TV?' The reason for that question is because they are so used to wanting to be secluded in their room," he said. "But, this is a tool to get them out of the room and be able to engage with other residents."

Aside from games and social media, It's Never 2 Late helps residents with dementia and other cognitive disorders through memory-stimulating and problem-solving programs.

The system also has applications for physical therapy, neuromuscular re-education and coordination.

Bonagofski said the platform includes music specifically for residents with sundown syndrome, which is a state of confusion among people with dementia that occurs late in the afternoon and spans into the evening.

"We have residents who like to wander because they are uncomfortable and, the thing is, a lot of wandering comes from them wanting to find somebody they know," he said. "The sundowner music calms them down and lets them know everything is OK."

Each user has access to the content suite with their own personalized landing page where they can add a "my story" function - a virtual scrapbook that shares their background with the community. There's also an option for residents' family members to upload videos or photos to their page so they can view special events like a grandchild's graduation or recital.

"What we do is share information with each other and kind of give each other talking points and it increases socialization," Bonagofski said. "You find things out that are just really exciting about each other."

Resident Ali Shannon has used the iN2L system to play trivia and access Google Maps to show staff a virtual tour of Modesto Junior College in California, where she once served as director of the school's nursing program.

Shannon said she is looking forward to learning how to use Skype to video chat with her daughter in California.

"It will be nice to see what my grandkids look like," she said.

Colorado-based It's Never 2 Late was co-founded by Jack York, his late brother, Tom, and Leslie Sweeney in 1999.

The business grew out of Sweeney's suggestion to donate computers to assisted-living facilities and nursing centers in California, said York, president of It's Never 2 Late.

"We just donated some computers without any thought of it being a business," York said.

York, who at the time was vice president of strategic sales for semiconductor manufacturer Vishay Intertechnology Inc., saw potential to connect seniors with technology, but through a platform that was more user-friendly than a traditional computer.

"We know people who were doctors, teachers, lawyers and welders. They deserved so much better than the programming that took place within a community," he said. "People still want to stay engaged and enjoy their day, so what we try to do is make it easy for that person and staff around them to be able to address that person's unique interests."

York said although there was some initial skepticism surrounding the platform, programming has evolved based on requests from users and has since become accepted among assisted-living facilities nationwide to engage seniors with technology.

"The first 10 years were pretty tough with trying to move the needle on the perception of what people could and couldn't do in nursing homes," York said. "We were fascinated with touch-screen technology way before it was mainstream and, as years have gone by, we've become a content company as much as anything else."

The iN2L platform is now in more than 3,000 senior-living communities in the United States and Canada.

"People make erroneous assumptions of what people can and can't do, especially folks living with dementia," York said. "This technology is a marvelous tool for them to still be relevant and experience joy."