These hand-built ice cellars are dug deep into the permafrost to age whale and walrus meat. 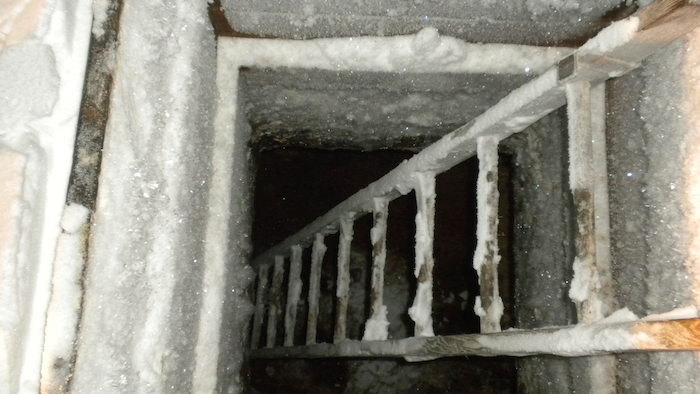 ANCHORAGE, Alaska (AP) — For generations, people in Alaska’s far-north villages have relied on hand-built ice cellars dug deep into the permafrost to age their whale and walrus meat to perfection and keep it cold throughout the year (view photos in gallery).

Scores of the naturally refrigerated food caches lie beneath these largely Inupiat communities, where many rely on hunting and fishing to feed their families. The ice cellars range from small arctic root cellars to spacious, wood-lined chambers, some topped with sheds.

Now, a growing number of these underground cellars are being rendered unreliable as global warming and other modern factors force changes to an ancient way of life. Some whaling villages are working to adapt as more cellars — some stocked with tons of subsistence food — turn up with pooling water and mold.

“I’m worried,” said Gordon Brower, a whaling captain who lives in Utqiagvik, the nation’s northernmost community, which logged its warmest May through September on record this year.

His family has two ice cellars: One is more than 100 years old and used to store at least 2 tons (1.8 metric tons) of frozen bowhead whale meat set aside for community feasts; the other was built in 1955, and is used as the family’s private subsistence-food cache.

Brower recently asked his son to retrieve some whale meat from one of the cellars, and discovered liquids had collected in both.

“He came back and said, ‘Dad, there’s a pool of blood and water at the bottom,’” recalled Brower, the North Slope Borough’s planning and development director. He pulled the community meat outside and has kept it under a tarp because the weather is cold enough now to keep it from spoiling.

“It seems like slight temporary variations in the permafrost — that active layer — is affecting the temperature of our cellar,” Brower said.

Residents and researchers say the problem has been building for decades as a warming climate touches multiple facets of life in the far north — thawing permafrost, disruptions in hunting patterns and shorter periods of coastal ice that historically protected coastal communities from powerful storms. Other factors include development and soil conditions.

The changes have increased vulnerability to foodborne illnesses and raised concerns about food security, according to studies by the Alaska Native Tribal Health Consortium. The group and state health officials say they have so far not heard of anyone getting sick.

There were once at least 50 ice cellars in Point Hope, an Inupiat whaling village built on a triangular spit surrounded by a large inlet and the Chukchi and Arctic oceans. Now, fewer than 20 remain, according to village services supervisor Russell Lane, a whaling captain who has lived his 52 years in the community of 750. The problems with cellars have become more pronounced in the past two decades, he said.

To compensate, Point Hope whaling captains have use of three walk-in freezers that were donated for use by the whaling community. But the much colder freezers do not impart the taste of aged whale meat so favored throughout the region. Lane himself initially stores meat in the traditional ice cellar his wife’s family owns, frequently checking it until it reaches the right maturity before he transfers it to a freezer.

“It’s definitely a challenge at this time to be able to feed our people that acquired taste,” Lane said.

Despite the unprecedented rate of climate change today, however, ice cellars failed in the past, including one account of a cellar developing mold in the early 1900s, according to a study published in 2017 that looked at traditional cellars in Utqiagvik, formerly named Barrow, following reports of flooded and collapsed cellars. The study, funded by the National Science Foundation and George Washington University, found ice cellars don’t meet federally recommended temperature standards, but allow the culturally preferred aging to occur.

The study was inconclusive about the cause of ice cellar failures, citing an absence of extensive scientific analysis. Researchers mapped 71 ice cellar locations around town and monitored five functioning cellars from 2005 to 2015, finding little thermal change over that relatively short timeframe. One of those cellars has since failed, however, and another is starting to collapse, according to one of the study’s authors, George Washington University research scientist Kelsey Nyland.

The study concluded that while a changing climate has great potential to affect ice cellars, there are other factors, including soil conditions and urban development. For example, some Utqiagvik residents might inadvertently warm the soil beneath their cellars by putting sheds on top of the entrances to keep them free of snow, Nyland said.

“Climate change, air temperatures, all these physical changes are affecting them,” she said. “But also, a lot of it has to do with development and modern life in an arctic setting.”

To adapt to the new environment, the village of Kaktovik, on the Beaufort Sea coast, took ambitious steps after it lost all but one family’s cellar to flooding.

The hand-excavated cellar was ready for use in 2017, but it has yet to be filled. Whaling captains want to expand it first, according to whaling captain George Kaleak Sr., who represents Kaktovik on the Alaska Eskimo Whaling Commission.

Temperature sensors inside the cellar show it’s working as intended, Kaleak said. He expects the expansion to begin as early as next spring.

In the meantime, subsistence foods are stored in three 40-foot (12-meter) village freezer vans. But that equipment is no substitute for imparting that aged taste so prized in the region, Kaleak noted. He hopes the new cellar mimics that process.

“There’s nothing that tastes better than ice cellar food,” he said.