It can rapidly detect toxin-producing algae. 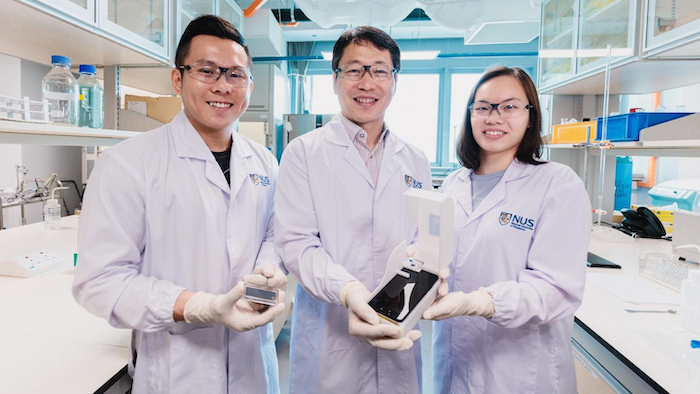 The NUS research team behind the novel algae detection device is led by Assistant Professor Sungwoo Bae (centre) who is holding the smartphone platform. With him are two team members: Mr Si Kuan Thio (left) who is holding the microfluidic chip, and Miss Elaine Chiang (right).
National University of Singapore

A team of engineers from the National University of Singapore (NUS) has developed a highly sensitive system that uses a smartphone to rapidly detect the presence of toxin-producing algae in water within 15 minutes. This invention can generate test results on-site, and findings can be reported in real-time using the smartphone's wireless communications capabilities.

This technological breakthrough could play a big role in preventing the spread of harmful microorganisms in aquatic environments, which could threaten global public health and cause environmental problems. 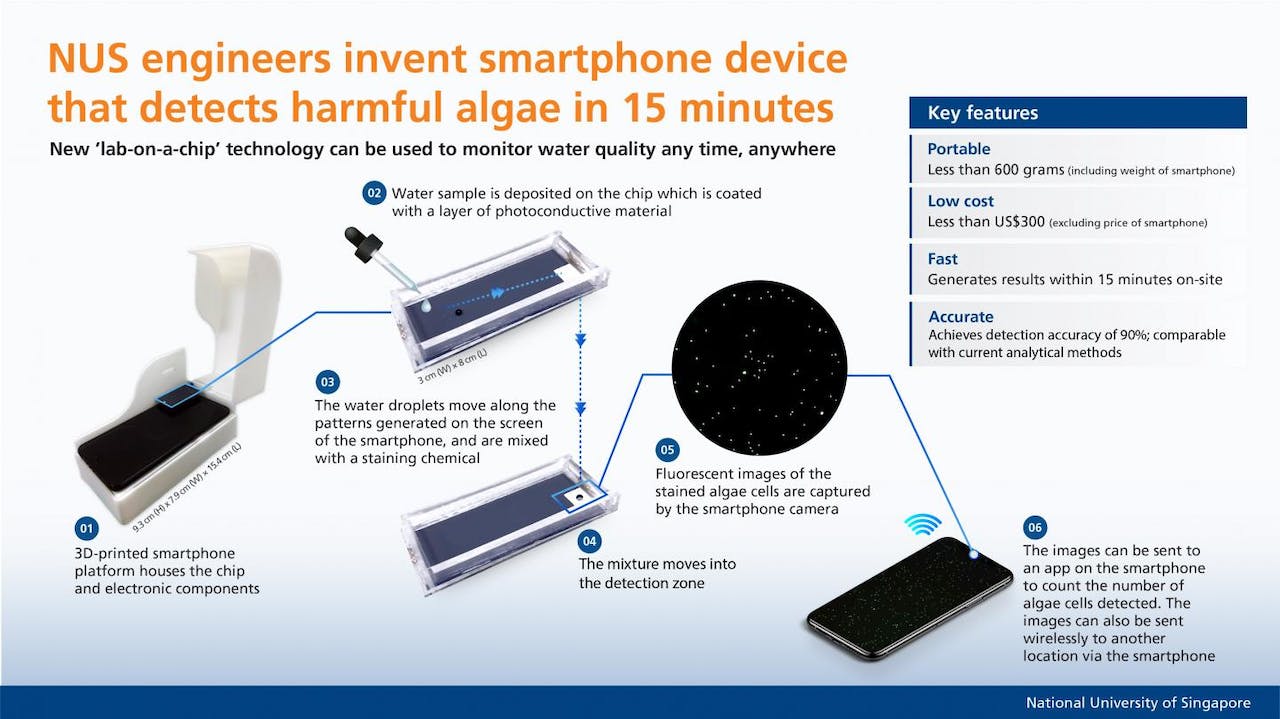 The smartphone device can generate test results on-site, and findings can be reported in real-time.National University of Singapore

The NUS team, led by Assistant Professor Sungwoo Bae from the Department of Civil and Environmental Engineering at the NUS Faculty of Engineering, published the results in the scientific journal Harmful Algae. This study was made available online in July 2019 ahead of the final publication in September 2019.

A sudden surge in the volume of algae and their associated toxins in lakes, ponds, rivers, and coastal waters can adversely affect water quality, and in turn, may have unfavorable effects on human health, aquatic ecosystems, and water supply. For instance, in 2015, an algae bloom wiped out more than 500 tonnes of fish in Singapore, and caused some fish farmers to lose millions of dollars.

Conventional methods of algae detection and analysis are time consuming, and require specialized and costly equipment, as well as skilled operators to conduct water sampling and testing. One approach is to test for the presence of chlorophyll using complex instruments that cost more than S$3,000 (US$2,200). Another common method is to carry out cytometric and image analysis to detect algal cells - this method involves equipment that cost more than S$100,000 (US$73,000).

"Currently, it can take a day or more to collect water samples from a site, bring them back to the laboratory for testing, and analyse the results. This long lead time is impractical for monitoring of algae blooms, as the management of contamination sources and affected waters could be slowed down," explained Asst Prof Bae.

To address the current challenges in water quality monitoring, Asst Prof Bae and his team took a year to develop the novel device that monitors microbial water quality rapidly and with high reliability.

The new NUS invention comprises three sections - a microfluidic chip, a smartphone, and a customizable 3D-printed platform that houses optical and electrical components such as a portable power source and an LED light.

The chip is first coated with titanium oxide phthalocyanine, a type of photoconductive polymer-based material. The photoconductive layer plays the important role of guiding water droplets to move along the chip during the analysis process.

The coated chip is then placed on top of the screen of a smartphone, which projects a pattern of light and dark regions onto the chip. When droplets of the water sample are deposited on the surface of the chip, a voltage drop difference, created by the light and dark areas illuminated on the photoconductive layer, modifies the surface tension of the water droplets. This causes the water droplets to move towards the dark illuminated areas. At the same time, this movement induces the water droplets to mix with a chemical that stains algae cells present in the water sample. The mixture is guided by the light patterns towards the camera of the smartphone.

This portable and easy-to-use device costs less than $220 - excluding the smartphone - and weighs less than 600 grams. The test kit is also highly sensitive, hence only a small amount of water sample is needed to generate reliable results.

The NUS research team tested their system using water samples collected from the sea and reservoirs. The water samples were filtrated and spiked with specific amounts of four different types of toxin-producing algae - two types of freshwater algae C. reinhardtii and M. aeruginosa, and two types of marine water algae Amphiprora sp and C. closterium. Experiments using the new device and a hemocytometer, a standard cell-counting technique commonly used for water quality monitoring, were conducted to test for the presence of algae.

The new smartphone system was able to detect the four types of algae with an accuracy of 90 per cent, comparable with the results generated by the hemocytometer.

Asst Prof Bae shared, "The combination of on-chip sample preparation, data capture and analysis makes our system unique. With this tool, water quality tests can be conducted anytime and anywhere. This new method is also very cost efficient as the microfluidic chip can be washed and re-used. This device will be particularly useful for fish farmers who need to monitor the water quality of their fish ponds on a daily basis."

This project was supported by the National Research Foundation Singapore through its Marine Science Research and Development Programme, and the Ministry of Education.

The research team is currently in discussion with industry partners to commercialize their technology.

The NUS researchers are also developing a new microfluidic chip that can be integrated with a modified version of the current 3D-printed smartphone platform to detect the presence of foodborne pathogens such as salmonella and other infectious pathogens.

Robot Chef Learns to 'Taste as You Go'