The teen delegation assembled a roving robot that effectively scooped up balls representing human-created pollutants in the ocean. 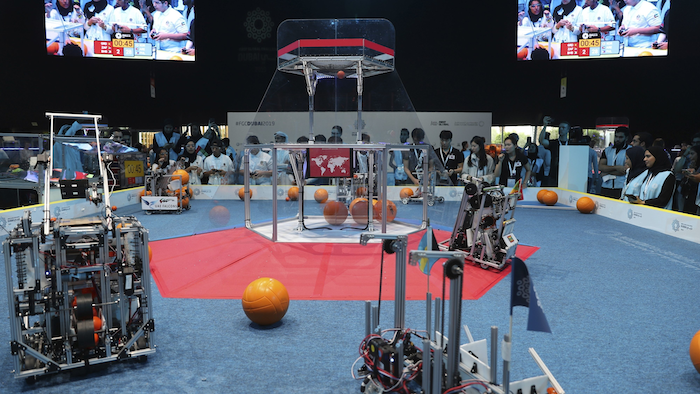 In this Oct. 25, 2019, file photo, a team from Korea, on the right, competes with UAE Falcons during the First Global Challenge, a robotics and artificial intelligence competition in Dubai, United Arab Emirates.
AP Photo/Kamran Jebreili, File

JERUSALEM (AP) — Israeli Prime Minister Benjamin Netanyahu greeted the country's triumphant teen delegation to the unofficial "Robotics Olympics" on Wednesday after its groundbreaking visit to Dubai, giving public expression to the growing, and increasingly open, relations between Israel and the United Arab Emirates.

The countries have long had back-channel security and cyber ties, mostly based on their shared enmity for regional foe Iran. Israeli businessmen and tourists have made clandestine visits to the oil-rich federation of sheikhdoms, using foreign passports and downplaying their identities.

But the UAE's issuing formal travel visas to the Israeli robotics team and extending an overtly warm welcome added a new layer of formality. The team's high-profile performance at the FIRST Global Challenge — finishing second after being edged out in a nail-biting, back-and-forth final — and their unabashed display of the Israeli flag and Hebrew language also gave the event an increased sense of normalization.

The teens arrived to their meeting with Netanyahu with the robot they assembled and posed for photos with the prime minister while wearing their silver medals. Netanyahu said their participation was "indicative of what is above water" in Israel's relations with the Gulf states.

"You went there with robotics and technology, but the reason why the State of Israel has forged ties with many countries in the first place is because we have technologies and capabilities against a common enemy in both the security and civilian spheres," he said, in a thinly veiled reference to Iran.

Like most of the Arab world, the UAE does not acknowledge Israel diplomatically, and says the lack of a Palestinian state is an obstacle toward full normalization. However, it has also been leading efforts to drop the Arab world's historic animosity toward Israel as part of burnishing a more progressive image with the West. The Emirati government this year is marking what it calls "The Year of Tolerance," which has included rabbis attending its interfaith events. Rulers have also given tacit approval to the growth of the local Jewish community in Dubai — the first new one in the Arab world in decades — and have pledged to build a massive multi-faith complex that includes a synagogue.

Emirati authorities have allowed Israeli officials to visit and the Israeli national anthem was played after an athlete won gold in an Abu Dhabi judo tournament. Next year, Israel is expected to have a prominent pavilion in Expo 2020, the world fair being hosted by Dubai. On Tuesday, the Israeli Yediot Ahronot daily splashed a front-page headline that the UAE would allow the arrival of tourists on Israeli passports for the Expo.

The team of five Israeli teenagers and their coaches were participating in a robotics tournament that included 1,500 students from 190 other countries. The events revolved around using robotics to solve global ocean pollution. In attending the event, U.S. Energy Secretary Rick Perry specifically mentioned the presence of the Israeli team as a hopeful message, as did Emirati officials themselves — who have sought to promote Dubai in particular as a hub of innovation that draws in the world's brightest minds.

The Israeli team, hailing from Megiddo in northern Israel, surged through the competition by assembling a roving robot that effectively scooped balls up that represented human-created pollutants in the ocean.

"The whole time we were wearing these two caps, also as a robotics team and also as ambassadors," said Osnat Duman, the delegation manager. "We got real VIP treatment and everyone welcomed us nicely."

The team exchanged souvenirs with the other delegations, handing out Israeli snacks and rubber bands and distributing an Arabic and Hebrew phrasebook with relevant terms for the tournament. The teams' pits were arranged alphabetically, so the Israelis found themselves adjacent to participants from Iran and Iraq. Duman said only the Tunisian team refused to accept the Israeli handouts. The main reminder of their unusual participation was the presence of a tough-looking additional technical "mentor" for the team, who was in fact a Shin Bet security guard dispatched to keep an eye on them.

"There was a lot of uncertainty about us arriving and there were some security concerns," Duman said. "But at the end of the day we were just dealing with people, not countries."