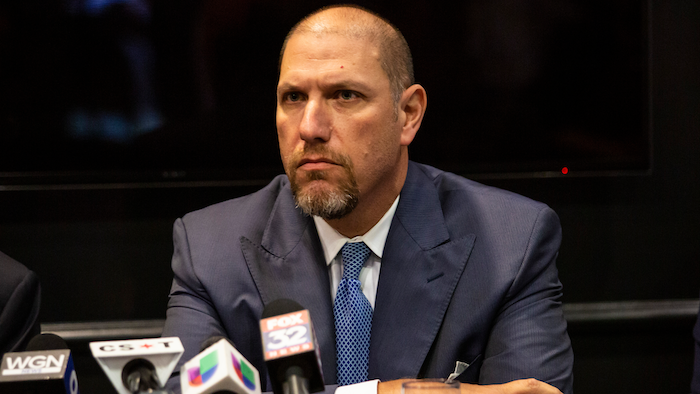 Attorney Steven Hart speaks about lawsuits against Sterigenics, alleging the medical equipment sterilization company has been emitting cancer-causing chemical ethylene oxide into the atmosphere, during a press conference at Staypineapple Hotel in the Loop, Tuesday, Aug. 20, 2019.
Ashlee Rezin Garcia/Chicago Sun-Times via AP

The 32 lawsuits filed against Sterigenics LLC this week in Cook County seek damages from the company, which operates a plant in Willowbrook.

Jeanne Hochhalter is one of those suing Oak Brook-based Sterigenics. She said Tuesday that the cancer she developed is directly related to the long-term release from the plant of the chemical ethylene oxide, a known carcinogen.

"I got breast cancer. I have no family history of it," Hochhalter said, adding she's undergone 15 surgeries during the last six years.

A Sterigenics spokesman said the company "has consistently complied with applicable regulations." The spokesman added the claims against Sterigenics lack merit and "we intend to vigorously defend against them."

Attorney General Kwame Raoul and DuPage County State's Attorney Robert Berlin in July reached an agreement with Sterigenics that will allow the plant to reopen after additional emission capture and control equipment is installed.

Sterigenics also agreed to fund $300,000 in community projects designed in coordination with the state to benefit the environment and the local community.

When the agreement was announced, Sterigenics president Philip Macnabb said resolution of the matter puts the company a step closer to resuming the work of sterilizing vital medical products and devices for patients in Illinois and beyond.

But Hochhalter and others who are suing Sterigenics argue the plant should never be allowed to reopen.

"Unfortunately and regrettably, Sterigenics seems to be on a path back to business as usual," said plaintiffs' attorney Todd Smith.

Brain Region Targeting Might Be Useful in Treating Visual Hallucinations

Fertility Treatment Use is On the Rise