The Monopoly maker is giving plastic packaging the boot. 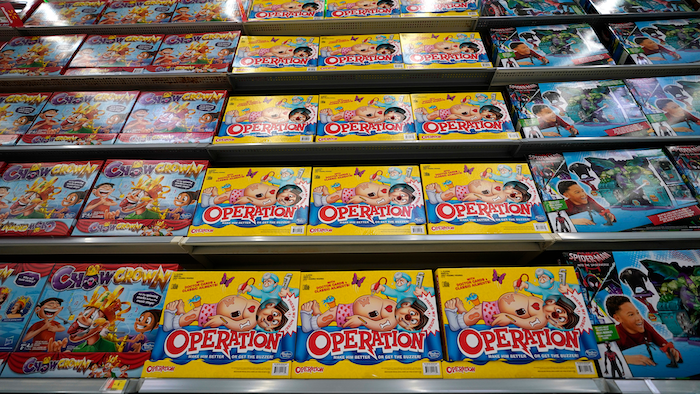 In this Nov. 9, 2018, file photo Operation made by Hasbro is displayed shelves in the expanded toy section at a Walmart Supercenter in Houston. The toy maker expects said Tuesday, Aug. 20, 2019, that all its packaging for new products to be virtually plastic free by the end of 2022. It plans to stop using plastic bags, elastic bands and the shrink wrap that’s usually found around Monopoly, Scrabble and other board games.
AP Photo/David J. Phillip, File

The toy maker said Tuesday that all its packaging for new products will be mostly plastic free by the end of 2022. It plans to stop using plastic bags, elastic bands and the shrink wrap that's usually found around Monopoly, Scrabble and other board games.

But Hasbro's toys, such as Mr. Potato Head, will still be made with plastic. The company said it is testing materials to replace it, but said it's challenging to find an alternative that's still safe for kids and keeps toys looking the same as the plastic ones.

Hasbro, however, said it has a program that allows people to ship in their GI Joes or My Little Pony figurines to be recycled.

Plastic is a menace to the environment. Much of it ends up in landfills and doesn't disintegrate, breaking down into tiny pieces that can harm birds and other animals if eaten. Some cities and states have banned plastic bags and several companies have made their own changes to reduce plastic waste.

Starbucks, for example, plans to get rid of plastic straws. And toy maker Lego is looking to find an alternative to plastic for its colorful bricks.

Hasbro, which is based in Pawtucket, Rhode Island, said it will begin cutting down on plastic packaging next year.