Plus, Astro the robotic dog and an autonomous boat designed to look for Amelia Earhart.

In 1937, Amelia Earhart tried to fly around the world. She didn't make it, and went down somewhere in the Pacific -- though she wasn't declared dead until 1939.

It's been 80 years and the search for Amelia Earhart and her Lockheed Model 10-E Electra has never ceased.

Researchers believe that a new autonomous boat named BEN may be the key to finding some answers. BEN (Bathymetric Explorer and Navigator) is an autonomous surface vehicle (ASV) designed at the University of New Hampshire and manufactured by ASV Global, an expert in unmanned and autonomous marine systems. BEN was created to explore the seafloor in waters too deep for divers.

The researchers are part of the crew aboard the EV Nautilus, which is led by National Geographic Explorer-at-Large Robert Ballard.

BEN was designed with state-of-the-art seafloor mapping systems to create a 3D topographic map of the ocean floor in the shallow areas near the island where Earhart sent her last radio transmission. The area is too deep for divers and too shallow for the Nautilus. BEN's maps will be used to plan targeted dives with remotely operated vehicles (ROV) to search for remnants of the plane.

Hopefully, after 80 years, this could finally bring some closure to this epic tale.

Just as soon as we cover a poop-scooping robot, the fleshy beasts could be rendered obsolete by a new robot dog from researchers at Florida Atlantic University.

Researchers took the SpotMini from Boston Dynamics, mounted a 3D printed Doberman pinscher head on it, and gave it a brain.

Astro was outfitted with a deep neural network, or digital brain, and is being trained to act like a dog. It can understand simple commands like stand, go forward, stop and, the classic, sit.

The 100-pound robot has more than a dozen onboard sensors, radar imaging, cameras and a directional microphone it uses to navigate. It also has a pair of kill-crazy digital eyes.

Next, the researchers are working on training Astro to understand hand commands, detect colors, understand multiple languages and coordinate with drones. You can imagine a pack of these things autonomously coordinating search and rescue efforts with a swarm of drones.

The dog will have facial recognition as well, to identify people as well as other dogs.

Other potential missions include detecting guns, explosives and gun residue.

Nothing on excretion yet. Maybe the Beetl can be retrofitted to clean up oil spots.

On the topic of drone swarms …

The test was held at Selby Combined Arms Collective Training Facility in Fort Benning, Ga. The exercise spanned two city blocks, and the swarms had to locate and isolate a mock city hall building, secure an objective inside and then secure the building, all while creating and monitoring a perimeter, in 30 minutes.

This was the second of six planned tests that will take place about six months apart.

The OFFSET program is made up of Swarm System Integrators and Swarm Sprinters. The Integrators, from Northrop Grumman and Raytheon BBN, create the tools the Swarm Sprinters from various teams and universities use to perform specific tasks.

The program isn't thinking small. DARPA envisions a future in which small, human ground units will be assisted by swarms of 250 collaborative autonomous robots. Likely a combination of flying drones and robotic dogs. 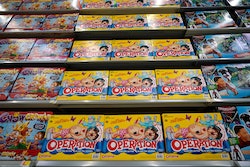 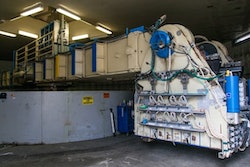