The new span would replace the Morandi bridge in Genoa that collapsed one year ago, killing 43 people. 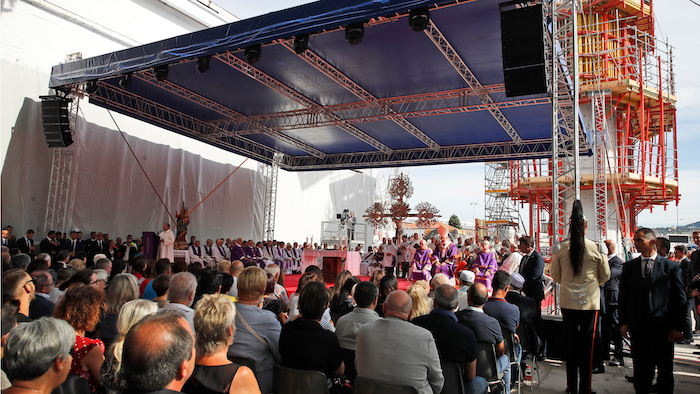 Relatives of the victims of the Morandi bridge collapse attend a remembrance ceremony to mark the first anniversary of the tragedy in Genoa, Italy, Wednesday, Aug. 14, 2019.
AP Photo/Antonio Calanni

ROME (AP) — Italian Prime Minister Giuseppe Conte has pledged that a new bridge for the Italian port city of Genoa will be ready by April, replacing the Morandi bridge that collapsed one year ago, killing 43 people.

An emotional ceremony was held Wednesday in Genoa marking the anniversary of the tragic collapse in 2018. Conte said that reconstruction works for the new infrastructure are moving forward "seven days out of seven ... and, according to forecasts, the new bridge will be accessible by April 2020."

A year later, the cause of the collapse hasn't been determined yet, but prosecutors are investigating poor maintenance and possible design flaws in the 51-year-old structure.

Hometown architect Renzo Piano has designed the new bridge, which resembles the bow of a ship in homage to Genoa's seafaring traditions.