ICE Raids: What About the Employers?

Federal law makes it a crime to "knowingly" hire workers who are in the U.S. illegally. 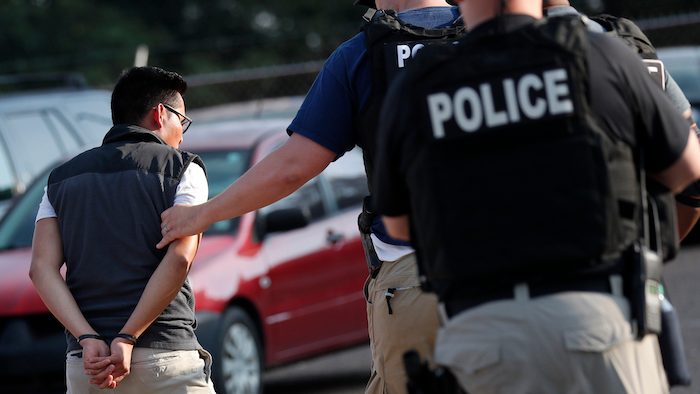 In this Aug. 7, 2019, file photo, a man is taken into custody at a Koch Foods Inc. plant in Morton, Miss. Unauthorized workers are jailed or deported, while the managers and business owners who profit from their labor often aren't. Under President Donald Trump, the numbers of owners and managers facing criminal charges for employing unauthorized workers have stayed almost the same.
AP Photo/Rogelio V. Solis, File

HOUSTON (AP) — The images of children crying after their parents were arrested in a massive immigration raid in Mississippi revived a longstanding complaint: Unauthorized workers are jailed or deported, while the managers and business owners who profit from their labor often go unprosecuted.

Under President Donald Trump, the number of business owners and managers who face criminal charges for employing unauthorized workers has stayed almost the same, even as almost every other enforcement measure has surged.

Last week's raids at seven chicken-processing plants were the largest worksite operation conducted under the Trump administration. The operation led to 680 arrests of people in the U.S. illegally, with expected criminal charges to follow for some. But no plant owners or top managers were immediately charged, following the pattern of other recent sweeps.

Lawyers and experts agree that investigating managers takes longer and is far more difficult than arresting workers. A key hurdle that predates the Trump administration is that federal law makes it a crime to "knowingly" hire workers who are in the U.S. illegally.

"The 'knowingly' term has proved to be a huge defense for employers," said Muzaffar Chishti, a senior fellow at the Migration Policy Institute. "The employer says, 'I'm sorry, I didn't know they were unauthorized.'"

In a statement Tuesday, U.S. Immigration and Customs Enforcement Acting Director Matthew Albence said that anyone found to have broken the law in the Mississippi case would be held accountable, including "the employers who profit off their crimes." Warrants unsealed after the Mississippi arrests allege that managers at two processing plants participated in fraud.

After Trump took office, then-Acting Director Thomas Homan declared that ICE would try to increase all worksite enforcement actions by 400%.

ICE succeeded almost across the board in just one government fiscal year. According to statistics the agency released in December, it quadrupled the number of investigations it opened and audits of paperwork submitted by employees to get hired. And it made 2,304 arrests in worksite cases, seven times as many as the previous year.

The major exception was for managers. ICE arrested just 72 managers in the 2018 fiscal year, compared with 71 the year before. And 49 managers were convicted of crimes, down from 55 the previous year.

Congress first created criminal penalties for employers in 1986. According to researchers at Syracuse University, prosecutions under the law banning employers from knowingly employing unauthorized workers have rarely exceeded 15 a year since then. Between April 2018 and this March, just 11 people were prosecuted in seven cases.

Employers can also be charged with other crimes. The former owner of a meat-processing plant raided in Tennessee last year was sentenced in July to 18 months in prison after pleading guilty to tax evasion, wire fraud and employing unauthorized workers. Investigations are still ongoing following several major Trump administration raids.

Companies and business owners are also better equipped to fight charges than workers who were already earning low wages and now face detention and deportation.

Those workers are sometimes victims of labor-trafficking schemes. They can be critical witnesses to prove businesses knew about their lack of legal status, except they may fear coming forward. Some opponents of the administration blame its immigration crackdown for deterring people from contacting law enforcement.

And while both Republicans and Democrats have previously supported enforcement of workplace immigration laws as a way to protect U.S. citizen workers, many businesses are having trouble finding workers due to low unemployment nationally. They quietly rely on unauthorized labor to stay productive, making prosecutions politically unpopular, Chishti said.

Trump himself has been accused of employing unauthorized workers at his hotels, golf courses and other businesses.

"On paper, there is a lot of enforcement of law, but in reality, people are constantly abusing the law," Chishti said.

Thomas Saenz, president of the Mexican American Legal Defense and Educational Fund, argued that ramping up penalties for employing unauthorized workers was counterproductive. Instead, he said, the U.S. should better enforce workplace safety standards and prevent wage theft, reducing the incentive for unscrupulous businesses to hire unauthorized workers.

"When you make immigrant workers afraid of the federal government, then you are protecting employers who exploit," Saenz said.

A common outcome in workplace cases is a settlement where the offending company pays a fine and agrees to adopt measures like checking every new hire in the federal E-Verify program, which examines personal information submitted to an employer in government records for any potential fraud.

ICE in August 2018 raided a trailer company in Sumner, Texas. Nearly 160 people were arrested at the company, Load Trail LLC.

Load Trail had reached a settlement with ICE just four years earlier. A new criminal investigation is now ongoing, and lawyers for Load Trail say they are close to reaching another settlement. The company said it had relied on staffing companies to provide workers and confirm their legal status.

In April, another raid targeted CVE Technology Group, which repairs and refurbishes cellphones, leading to 284 arrests. That investigation is also ongoing.

Both companies say their business has fallen and they have had trouble hiring replacement workers. Rick Gump, a lawyer for CVE, said the company lost several major contracts after the raid, causing a roughly 75% decline in business.

"The likelihood is a lot of the business that was here in the U.S. has been sent overseas," he said.