The processing plant fired most of its remaining workers after nearly 100 accused of immigration violations were arrested last week. 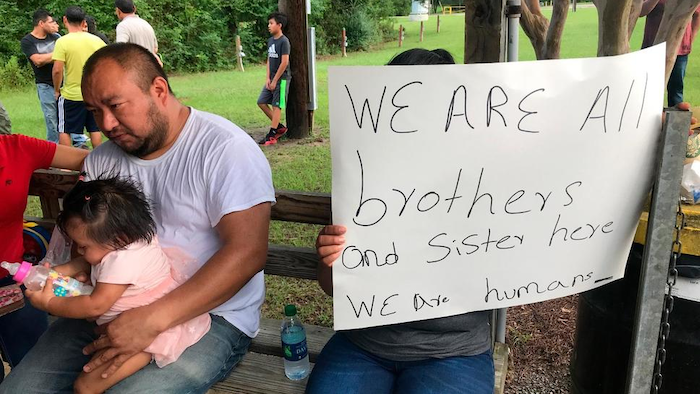 Workers from PH Foods and their supporters gather at a protest on Tuesday, Aug. 13, 2019 in Morton, Miss., after workers from the chicken processing plant said they were fired. Workers say the plant fired the majority of remaining workers days after federal agents arrested 99 people there for immigration violations.
AP Photo/Terry Truett

A Mississippi chicken processing plant fired most of its remaining workers after nearly 100 accused of immigration violations were arrested last week, witnesses said, an indication that the crackdown could make finding work in the state's poultry industry more difficult for Latino immigrants.

Terry Truett, a volunteer with the Mississippi Immigration Coalition, said she and others were called Tuesday to a Morton park where former PH Food workers were staging a protest, saying the company had abruptly fired them at the end of their shift and was illegally withholding pay.

It's unclear exactly how many were fired, although Truett said more than 100 workers' names were collected at the protest in Morton, about 40 miles (65 kilometers) east of Jackson.

PH Food is one of seven Mississippi plants raided Aug. 7 by U.S. Immigration and Customs Enforcement agents. The agency arrested 680 people accused of working in the United States without legal permission, quickly releasing about 300. ICE also seized company documents as part of an investigation into what managers knew. ICE said it arrested 99 people at PH Food.

Normally, when a company with more than 100 employees lays off more than a third of its workforce, it must give 60 days' notice to affected employees, and local and state government. Dianne Bell, a spokeswoman for the Mississippi Department of Security, said PH Foods has not filed notice with the state. Bell said a company employee told her Wednesday that there had been no layoffs.

The company told The Associated Press on Wednesday to call back and later hung up on a reporter. On Thursday, a person who answered the phone said the company isn't commenting. Phone calls to the payroll company weren't returned.

Truett and others say most of the people ICE arrested at PH Food worked on the first shift. Second-shift workers trickled back to work in the days after the raid even though most lack legal status, according to the Rev. Roberto Mena, pastor of St. Martin de Porres Catholic Church.

"Some — almost all of them — they are undocumented in some way," Mena said.

Truett and Mena said workers came to the church after the Tuesday protest to consult with lawyers. Others held a meeting at a nearby restaurant because the church was too small for the crowd.

A search warrant unsealed last week cites a confidential informant telling investigators that workers at PH Food knew most of its 240 workers didn't have legal permission to work in the United States. The informant told investigators that managers encouraged workers to make up Social Security numbers and tried to use a payroll outsourcing firm in Louisiana to mask their activities.

The informant also alleged that PH and the payroll company didn't try to verify the authenticity of work documents, even though Mississippi state law requires employers to check documents using E-Verify, an otherwise voluntary online federal system. At other plants that were raided, investigators presented efforts that employees were working under assumed but real identities often bought on the black market.

No PH Food managers have been charged, although U.S. Attorney Mike Hurst has said a criminal investigation continues.

PH and another plant raided in nearby Pelahatchie — A&B Inc. — are identified in sworn statements as being owned by California resident Huo You Liang, known to his Mississippi employees as Victor Liang.

Truett said workers were asked to sign I-9 forms verifying their identities after the raid. American workers usually sign such forms as they begin employment. Then managers came through the plant Tuesday and fired all but "a handful" of workers on the spot, she said.

Karla Vazquez-Elmore, who works for an immigration law firm in Jackson, said at least four of her firm's clients who weren't arrested last week have contacted her to say they were fired by PH Food. She said one client among those arrested last week told her PH Foods denied the worker's final paycheck.

Mena, like Vazquez-Elmore and Truett, said at least some workers who were arrested last week had gone to PH Food seeking their paycheck but were denied. That's against federal law, even if people don't have legal permission to work.

Truett said desperation led people to protest, even though many Latinos in chicken plant towns are in near seclusion right now for fear of arrest.

"They were at wit's end," Truett said. "They felt like they had nothing to lose. These folks have no income."

ICE Raids: What About the Employers?