Eighteen factories and other facilities run by General Motors, Ford and Fiat Chrysler were affected Thursday. 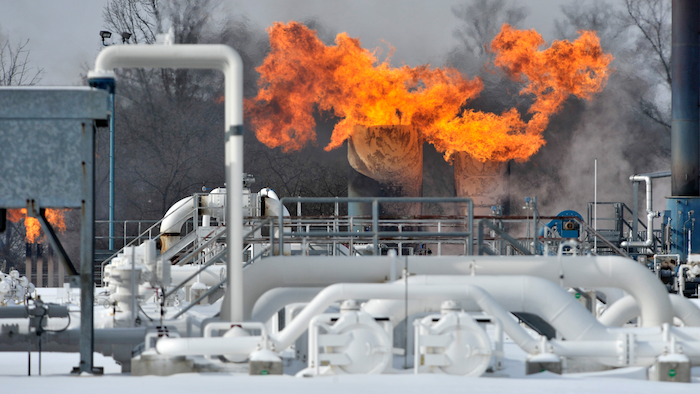 Fire comes out of the top of two structures at the compressor station at Consumers Energy in Armada Township, Mich.
Todd McInturf/Detroit News via AP

Auto plants and other big energy users throughout Southeast Michigan are shutting down or limiting operations due to a natural gas shortage caused by a fire and frigid weather.

Eighteen factories and other facilities run by General Motors, Ford and Fiat Chrysler were affected Thursday. It's not clear when they'll resume normal operations.

The fire hit a Consumers Energy natural gas compressor station north of Detroit on Wednesday as record-cold temperatures swept over the region.

The utility says gas flow from the station was shut off, putting Michigan residents at risk of brief service interruptions in subzero temperatures.

Fiat Chrysler closed its truck assembly plants in Warren and Sterling Heights, Michigan, while Ford reduced operations at two transmission factories and a plant that stamps parts for the hot-selling Ford Ranger small pickup near Detroit. Ranger production was unaffected for now.

General Motors suspended operations at factories in Flint, Lansing, Saginaw, Pontiac, Orion Township and Bay City, Michigan. The Flint plant is gearing up for the launch of new heavy-duty pickup trucks. Even General Motors' sprawling technical center in Warren, Michigan, north of Detroit, was closed and its roughly 20,000 employees were told to stay home. About 30,000 employees were affected at GM alone.

Only factories served by Jackson, Michigan-based Consumers Energy were affected. Plants powered by the region's other utility, DTE Energy, had no disruptions.

Automakers were hoping that the plants can return to normal operations as temperatures moderate on Saturday and into next week, but they weren't sure when that will happen.

Automakers usually can make up for lost production days by increasing assembly line speeds, but if the plants are closed or limited for a long time, that gets harder.

In addition, Hemlock Semiconductor, with operations in the Saginaw area about 110 miles (177 kilometers) north of Detroit, cut production to help Consumers Energy. Hemlock is a large electricity user.

Consumers Energy's CEO Patti Poppe made an appeal Wednesday night for customers to reduce their natural gas usage. Localized outages were possible for some homes and businesses if demand isn't reduced.

An emergency alert was sent late Wednesday to cellphones asking people to lower thermostats to 65 degrees (18 degrees Celsius) or below through Friday. And Consumers Energy asked its largest business customers, such as automakers, to reduce natural gas usage.

Michigan Gov. Gretchen Whitmer also appeared in a video online Wednesday night and said the request to lower thermostats was for those in the Lower Peninsula. Temperatures in the state were at their lowest levels of the week, with readings around negative 12 degrees (negative 24 degrees Celsius) in the Detroit area and at bitterly cold levels statewide.

No one was injured in the fire Wednesday at Consumers Energy's Ray Natural Gas Compressor Station in Macomb County. The cause of the fire was under investigation. The company said all gas flow from the station was shut off, and that it activated natural gas peaking storage fields to help meet demand for gas to heat homes and businesses.