Uncertainty over funding is forcing some states to delay contracts for new road and bridge work, while others are preparing for that possibility. 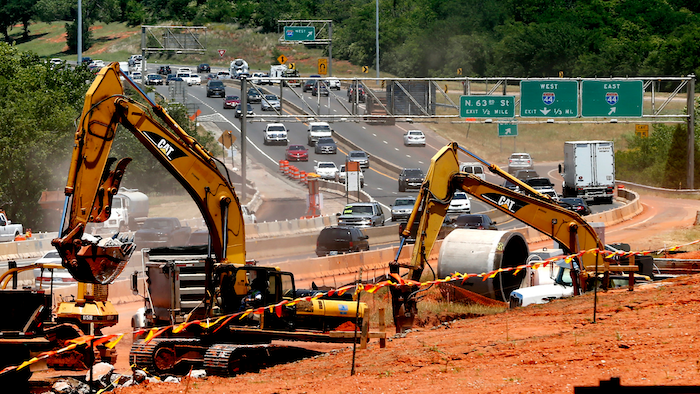 In this May 31, 2017 photo, traffic travels along Interstate 235 near a construction project in Oklahoma City, Okla.
Steve Sisney/The Oklahoman via AP

Uncertainty over federal funding for transportation projects amid a partial government shutdown is forcing some states to delay contracts for new road and bridge work while others are preparing for that possibility.

Transportation officials in Oklahoma this week announced plans to delay bids on 45 highway projects worth about $137 million.

"This will affect only new projects that we haven't (bid) yet," Oklahoma Department of Transportation spokeswoman Terri Angier said. "Unless they reach a resolution that includes the budget and authorizes us more money to put toward the projects, we can't add new projects."

The agency is delaying bids on 26 projects totaling about $101 million in January and another 19 projects in February worth about $35.6 million, she said.

Highway and bridge projects already underway are not affected by the federal shutdown. The disruption in federal funding flowing to the states instead affects future projects for which departments were going to award bids in the coming weeks. That will put the bidding process on hold, especially in states that receive a large share of their highway dollars from the federal government.

Delays can push back those construction projects by months or even into next year.

Officials in some states say they are starting to see the effects of the shutdown. Federal agencies that often are involved in approving transportation projects, such as the U.S. Fish and Wildlife Services and the Bureau of Indian Affairs, are closed and unable to act.

"The longer these delays continue, the more likely it becomes that projects will not meet their planned (contracting) dates," said South Dakota Department of Transportation Secretary Darin Bergquist.

States that receive a greater percentage of road and bridge funding from the federal government should be particularly concerned, said Tony Dorsey with the American Association of State Highway and Transportation Officials in Washington, D.C.

"It's just simple math," Dorsey said. "If you have a big chunk of your funding coming from the feds and you've got a partial government shutdown affecting that funding, you might be less inclined to move forward with these major projects."

The association says some states, including Montana, New Mexico and Rhode Island, receive more than 85 percent of their transportation funding from federal sources, although transportation officials in those states said the federal shutdown has not yet delayed any projects.

The Missouri Highways and Transportation Commission is expected to approve bids for 24 projects costing about $60 million at a meeting Thursday. The state agency, which has a $700 million cash balance, is pressing forward with planned projects despite the uncertainty over federal funding.

"We maintain a cash balance that allows us to handle these types of situations, and some states do not," Missouri transportation department spokesman Bob Brendel said.

Even if an agreement is reached soon to end the shutdown, the delays in Oklahoma could be exacerbated by environmental and weather concerns. That can create a domino effect that leads to projects getting postponed for much longer, said Angier, the transportation department spokeswoman.

As an example, she said work on state bridges can't start once nesting season begins for cliff swallows, a protected species that frequently makes its home on the underside of bridges. That season runs from March to September.

She pointed to planned construction on a bridge over Interstate 35 south of Oklahoma City that is several decades old.

"If we don't let this project, it's not just delaying it for a few months," Angier said. "It could be a year before we could get back to that project."

She said the agency also times the (contracting) of projects so that much of the work, particularly asphalt resurfacing, can be done in the spring and summer when the weather is better.

Local officials are dismayed that the $9.3 million project to improve on- and off-ramps on the I-35 bridge is being delayed. They say the project is critical for connecting local communities.

"My best guess would be 400 vehicles a day cross that bridge, including school buses, mail trucks, oil industry trucks," said McClain County Commissioner Wilson Lyles. "That project would definitely make it safer for the motoring public."