Engineers say there have long been concerns about the unusual concrete-encased stay cables, which Riccardo Morandi used in several of his bridge designs. 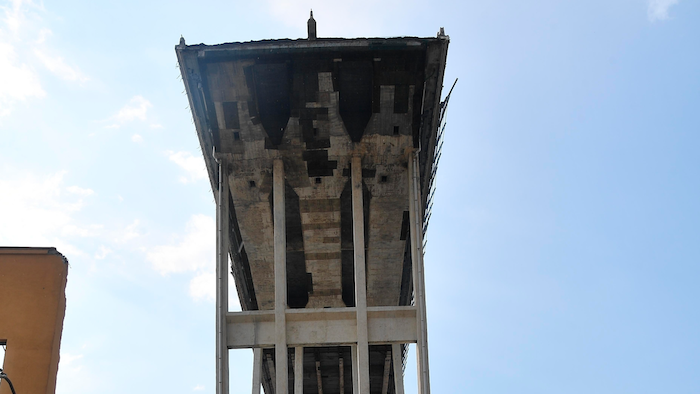 The Italian engineer who designed the Genoa bridge that collapsed and killed dozens warned four decades ago that it would require constant maintenance to remove rust given the effects of corrosion from sea air and pollution on the concrete.

RAI state television broadcast excerpts Sunday of the report that the late engineer Riccardo Morandi penned in 1979, 12 years after the bridge bearing his name was inaugurated in Genoa. The Associated Press downloaded the English-language report from an engineering news portal.

At the time of writing, Morandi said there was already a "well-known loss of superficial chemical resistance of the concrete" because of sea air and pollution from a nearby steel plant. He said he chose to write about it because the degradation represented a particular "perplexity" given the "aggressivity" of the corrosion that wasn't seen in similar structures in different environments.

Morandi reaffirmed the soundness of the reinforced concrete bridge design he used but warned: "Sooner or later, maybe in a few years, it will be necessary to resort to a treatment consisting of the removal of all traces of rust on the exposure of the reinforcements, to fill in the patches."

He recommended using an epoxy resin to cover the reinforcements with materials "of a very high chemical resistance."

A huge section of the bridge collapsed Aug. 14 during a fierce storm, killing 43 people and forcing the evacuation of nearby residents in the densely built-up area.

The cause is under investigation, and a team of engineers appointed by the ministry of infrastructure and transportation carried out a preliminary inspection Sunday after rescue crews concluded their search for the missing.

The head of the government team, Roberto Ferrazza, said the preliminary survey suggested a series of possible causes and not just a simple collapse of the bridge support since the span appears to have initially experienced a distortion.

"We have to look at the positioning of the rubble, considering that there was a break that provoked an imbalanced movement of the structure," the ANSA news agency quoted Ferrazza as saying.

The Espresso newsmagazine reported Sunday that Ferrazza was one of the engineers who knew about the advanced corrosion underway on the key bridge support that gave way, having attended a Feb. 1 meeting of experts from the transport ministry and the company that manages bridge repairs.

Minutes of the meeting, which bear Ferrazza's signature, recommended that the supports be reinforced given the "trend of degradation" being registered. Bidding opened in April for the 20 million-euro ($23 million) public works contract to do the work, according to Italian media.

The Morandi Bridge was a key artery that linked highways to Milan and France, a vital lifeline for both commercial traffic as well as vacationers bound for the mountains and Mediterranean beaches.

Engineers say there have long been concerns about its unusual concrete-encased stay cables, which Morandi used in several of his bridge designs instead of the more common steel cables.

Late Sunday, dozens of Genoese residents gathered in a central piazza to both vent rage and pain over the collapse. Many wrote messages and poems on sheets of white paper unrolled on the piazza cobblestones.

"We choose the paper because this way everyone can write whatever he or she thinks without necessarily shouting, or screaming at a time when all we need is silence," said Elisa D'Andrea, one of the event organizers.