Work is getting started even though a federal appeals court delayed construction in another section. 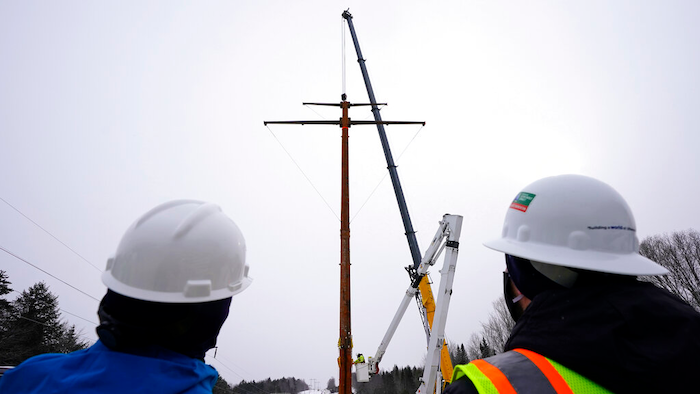 PORTLAND, Maine (AP) — Construction on part of a $1 billion electricity transmission corridor through sparsely populated woods in western Maine is on hold because of legal action, but that doesn't mean all building has been halted.

Workers installed the first of 829 steel poles Tuesday on a widened portion of the existing corridor that is part of the project near The Forks, as the groundwork is laid for the 145-mile (230-kilometer) New England Clean Energy Connect.

The work is getting started even though the 1st U.S. Circuit Court of Appeals delayed construction of a new 53-mile (85-kilometer) section.

Three conservation groups are seeking an injunction to delay the project while they sue to force the U.S. Army Corps of Engineers to conduct a more rigorous environmental review.

“This project has always promised to provide an economic boost to Maine’s economy, and we are already seeing those benefits take shape," Thorn Dickinson, CEO of the New England Clean Energy Connect, said Tuesday.

The electricity transmission line would provide a conduit for up to 1,200 megawatts of Canadian hydropower, reducing greenhouse emissions and stabilizing energy costs in New England, supporters say.

The project, which would be fully funded by Massachusetts ratepayers to meet the state’s clean energy goals, calls for construction of a high-voltage power line from Mount Beattie Township on the Canadian border to the regional power grid in Lewiston, Maine.

Critics have been trying to stop the project, saying it would destroy wilderness in western Maine. They also say that the environmental benefits of the project have been overstated.

In addition to the lawsuit, opponents have submitted petitions seeking to have a statewide vote.

Sandi Howard, a leading opponent of the project, said the decision by the company to proceed showed “disdain for everyday Mainers” by ignoring permit appeals and ongoing litigation.

“For years, CMP has pushed the false narrative that their unpopular and destructive project is a ‘done deal’ to bully Mainers into submission on this for-profit project. But to be clear, we won’t stop until Maine voters (their customers), have the chance to vote,” said Howard, who led the referendum petition drive for the No CMP Corridor PAC.

The final approval came in the form of a presidential permit issued last month from the U.S. Department of Energy, providing green light for the interconnect at the Canadian border.