Police Investigate if Crashed Tesla Was in 'Autopilot'

The driver of the rented Tesla ran a red light in San Francisco, killing a tourist and critically injuring his wife. 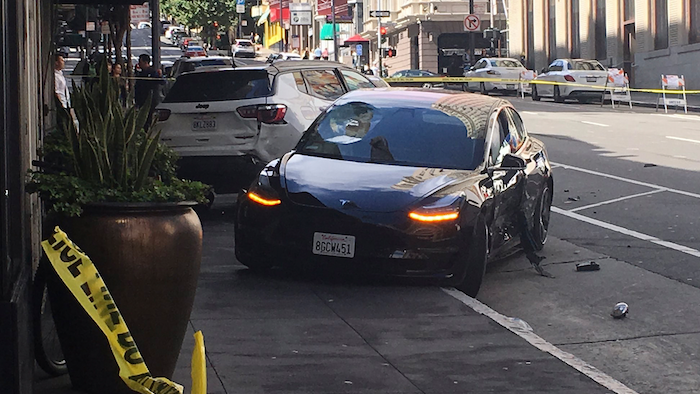 This photo taken Sunday, July 21, 2019, shows the scene after a woman was arrested after running a red light in a rented Tesla in San Francisco.
Kate Larsen/KGO-TV via AP

SAN FRANCISCO (AP) — A woman was arrested after running a red light in a rented Tesla in San Francisco and causing a crash that killed a tourist and left his wife critically injured, authorities said Monday.

Officers were investigating whether the Tesla, which was rented through the peer-to-peer car rental service Get Around, was operating in "Autopilot," a partially self-driving system, when the collision occurred.

Tesla's Autopilot had been activated at the time of two separate fatal crashes in Florida.

Get Around spokeswoman Joan Wickham said the company is cooperating with authorities and couldn't comment further "out of respect for the families involved and the investigation underway."

The 22-year-old suspect, who has not been identified, was booked on suspicion of vehicular manslaughter and running a red light, police said.

Drugs and alcohol did not appear to be a factor. The woman was driving Sunday at least 45 mph (70 kph) in an area with a speed limit of 25 to 30 mph (40 to 50 kph), when she ran the red light and was broadsided by another car, San Francisco police Sgt. Frank Harrell told KGO-TV .

The Tesla struck the couple in a crosswalk, killing 39-year-old Benjamin Dean. His wife, Kelly Dean, was in critical condition.

The couple from Clovis in the Central Valley was in San Francisco celebrating their third wedding anniversary, according to Kelly Dean's Facebook page.

Get Around says on its website that all its rentals are insured through its primary insurance policy.