When they see a cyclist, they're less likely to notice a jogger. 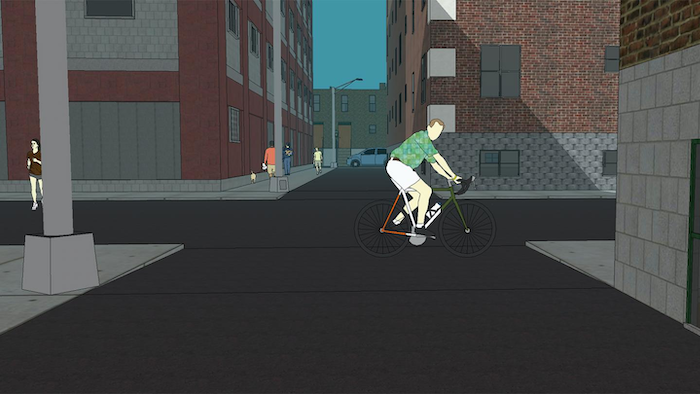 When people notice one traffic hazard, they are less likely to see a simultaneous second hazard, according to new research from NC State. The study used images like the one shown here. Viewers were less likely to notice the jogger on the left when the bicyclist was also in the image.
Robert Sall, NC State University

When people notice one traffic hazard, they are less likely to see a simultaneous second hazard, according to new research from North Carolina State University. The finding has potential applications for both driver training and the development of automated, in-vehicle safety technologies.

"This is a phenomenon called a subsequent search miss (SSM), which was first described in the context of doctors evaluating medical images - their ability to spot a problem was hindered if they had already found another problem in the same image," says Jing Feng, corresponding author of a paper on the research and an associate professor of psychology at NC State. "We wanted to determine whether SSMs might impact driving safety. What we've found suggests that SSMs may play an important role."

To test this, researchers conducted three studies. Each study asked participants to evaluate 100 traffic images and identify any potential hazards that would prevent them from driving in a given direction. Each image contained between zero and two hazards. Some hazards were "high-salience" targets, meaning they were glaringly obvious - like a red sports car. Other hazards were low-salience targets, such as drably dressed pedestrians.

In the second study, researchers gave 29 participants up to five seconds to spot any hazards. In this study, participants did a better job of identifying both high-salience and low-salience targets - but low-salience targets were still 15% less likely to be identified in scenes where there were two hazards. In other words, while performance improved with extra time, SSMs were still present.

In the final study, researchers gave 30 participants up to five seconds to identify any hazards - but there was a twist. Scenes were introduced as having either a high risk or a low risk of containing multiple targets.

"Here, we found that participants spent more time evaluating traffic scenes after being told the scenes were high risk," says Robert Sall, first author of the paper and a Ph.D. student at NC State. "However, there was still a distinct pattern of performance that could be attributed to SSMs."

"This work gives us a much better understanding of why people miss certain hazards when driving," Sall says. "It could help us modify driver training to reduce accidents, and inform the development of in-vehicle technologies that focus on accident reduction."

"Our findings will also likely be useful for those whose work involves traffic accident diagnostics," Feng says. "It's now clear that SSMs have the potential to prevent drivers from noticing important pieces of visual information, which may contribute to lapses in driving performance. A great deal of work now needs to be done to determine the scope of the problem and what we can do about it."

Bike Balls Are Exactly What You Think They Are