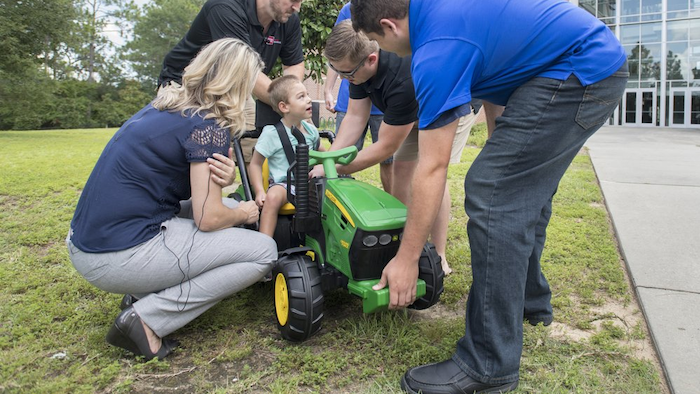 Four-year-old Jack Carroll looks up at the UWF engineering students as they help him into a vehicle that they modified for him at University of West Florida's Hal Marcus College of Science and Engineering in Pensacola on Wednesday, July 17, 2019. The modified vehicle will help Jack's mobility that is reduced due to cerebral palsy.
Gregg Pachkowski/Pensacola News Journal via AP

The Pensacola preschooler barely sat still in his stroller as his parents, Mike and Danielle Carroll, rolled him into the University of West Florida's Hal Marcus College of Science and Engineering on a recent afternoon.

As soon as he got inside on the tile floor, Jack, who has cerebral palsy, slid out of his stroller and scooted across the floor on his rear end, smiling and laughing as his dad chased him. He then stood up, with the help of his dad, and slowly started trying to climb a staircase.

"He may go up all those stairs just to prove that he can do it," his mom said as she looked on. (He did.)

Jack won't have to scoot around much anymore, thanks to a team of engineering students and professors at UWF who have spent the past year constructing an adaptive mobility vehicle just for him. The John Deere tractor-themed power wheels car was engineered as a semester project for the rising seniors, and it was finally presented to an excited Jack and his beaming parents at UWF's campus on Wednesday.

As soon as Jack saw the car, he motioned to get off his dad's shoulder and sat down in the specially fitted seat. He put his foot on the gas pedal and off he went — in a straight line mostly, because he hasn't figured out the whole steering wheel thing quite yet.

"We are very grateful, we think it's just a wonderful project," his mom said. "I don't think they know just what it means for parents like us to be able to get something like this for Jack. His friends at school all have wheels, now he'll be able to be just like them. He'll be able to get up and go, which is good because he doesn't like to stop."

Jack was born prematurely at 24 weeks old, and has cerebral palsy and developmental delays as a result. It takes more effort for Jack to move than most other kids his age, but the rambunctious preschooler is entering his second year at Capstone Academy in Pensacola and is thriving, his parents said.

"His prognosis was not good, but he has really exceeded all expectations," Danielle Carroll said. "He's done well in all of his physical therapy, he's starting to talk a lot more."

Brad Regez, assistant professor of mechanical engineering, said he was inspired to build an adaptive vehicle after seeing Go Baby Go, a program that provides modified, ride-on cars for young children with disabilities so they can move around independently. His students — Fred Anderson, Selena Beasley, Isaac Brunet, Phillip Mitchell, Cody Sewell and Shane Smith — started out designing a vehicle of their own and dubbed the program "ArgoTots."

The team connected with the Carrolls, who said a family friend nominated Jack for the project, and they began working together to determine what would best fit Jack's needs.

"We started with the kid and then moved onto the car," said Smith, one of the students. "We knew Jack and what he needed, and we took his specific needs and said, 'How can we customize this car?'"

The team spent 11 months determining how to retrofit a child-sized John Deer tractor to fit Jack's needs. He's stronger on his right side, so they put the gas pedal on the right side of the car. They 3D-printed a steering wheel that was larger and easier to turn. They added a three-point harness so the wiggly 4-year-old won't fall out. They added a remote control so Mom and Dad can also control the car, complete with a "kill switch" in case they need Jack to stop driving.

The team's design, materials, testing and calculations took months of preparations, while the implementation of the design and planned modifications took less than a week. During the fall semester, the students documented in detail each step of the build and modification process, and conducted rigorous testing and inspection after each modification. They were required to give multiple presentations on their progress or any issues during their build.

And finally, on Wednesday, they presented the Carrolls with the finished project and watched as Jack got his first taste of freedom.

"I'm happy that we could help him," Brunet, another one of the students, said Wednesday as he watched Jack zoom around in the car. "This project is 11 months in the making."

ArgoTots is going to continue as a program at UWF, and engineering students next year will find a new child in the community who needs help.

Jack's parents said the car will help their son immensely with his growth and development.

"It's really going to be able to help him explore his environment," his mom said. "Most kids his age would be able to run around and be more independent. This will allow him the freedom to explore and to move around."