Officials aim to keep modern diesel vehicles on the road while upgrading or retiring older models. 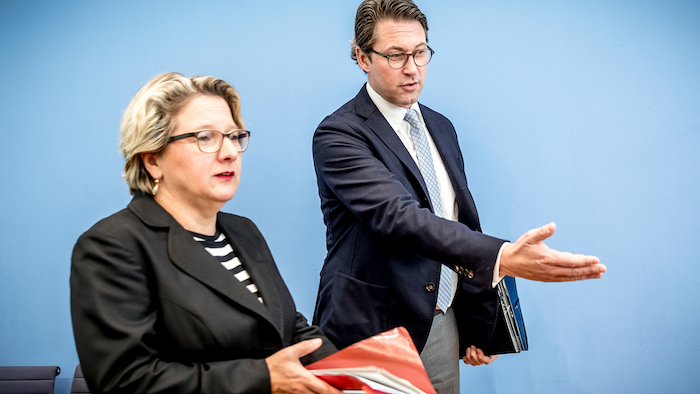 The German government backed plans Tuesday to help reduce pollution from diesel vehicles while easing the burden on consumers worried about costly upgrades.

"Our goal is to avoid a driving ban and ensure the air quality of our cities," Schulze said.

The issue is a political hot potato in a country in love with its cars and where diesels are favored by commuters and small businesses for their generally better efficiency and lower fuel costs.

At the same time, the government doesn't want to damage the country's automobile industry — including manufacturers Volkswagen, Mercedes and BMW — by saddling it with too many upgrade costs.

Its hand has been forced after several cities began instituting piecemeal bans on older diesels to comply with European Union clean air rules on levels of nitrogen oxides, following lawsuits from environmental groups.

Scheuer said there had been an urgent need to provide a clear path forward for owners of diesel vehicles wondering what to do.

He and other members of Chancellor Angela Merkel's coalition government met until the early morning hours to come up with the new measures.

Among other things, the plan calls for auto manufacturers to offer generous trade-in offers for older model diesels against new cars, or cleaner used vehicles.

When possible with newer diesel vehicles, consumers should have the option to upgrade the mechanical systems if there is an appropriate retrofit available, Scheuer said.

In Germany's most polluted cities, the government also plans to help municipalities upgrade their vehicles like garbage trucks and street cleaners, and to try and limit costs to businesses for delivery vans and other vehicles.

Scheuer said Germany's major automakers were on board with the trade-in idea, and were still discussing whether upgrades would be technically possible and cost effective for their vehicles.

"Today is a huge step forward but we still have work to do," he said.

Volkswagen, Europe's largest automaker whose admitted manipulation of its cars' diesel emissions helped spark the recent focus on the pollution they cause, said it would establish a trade-in bonus program as soon as possible.

It foresees paying customers the trade-in value of their car, plus incentives of several thousand euros (dollars) depending upon its model and age.

Upgrades, it said, will depend upon solutions being "available, approved, and durable" and noted that retrofitting could lead to increased fuel consumption and a lower comfort level.

Ferdinand Dudenhoeffer, an expert with Germany's CAR automotive research center at the University of Duisburg-Essen, was skeptical about the plan, noting that a 2017 offer of high trade-in prices on older diesels failed to generate the results hoped for.

"Overall, we see the results of trade-in offers as limited," he said.

There also remains the lingering question of how foreign carmakers could be forced into compliance, but Schulze said she was convinced they would follow the lead of the domestic companies.

French automaker Renault already said it would be offering up to 10,000 euros ($11,500) for German owners of its older diesel vehicles to trade them in for a new car.

The issue with older diesel cars is not a German one alone, with several cities across Europe also having announced they are considering bans.

On Tuesday, Denmark's center-right government announced it wanted to completely end the sale of vehicles operating on only gas or diesel to help reduce pollution as of 2030.

"The future is green, and it is very close to us," he said.