European automakers have pulled back on plans to build Iranian factories or import their cars into the country. 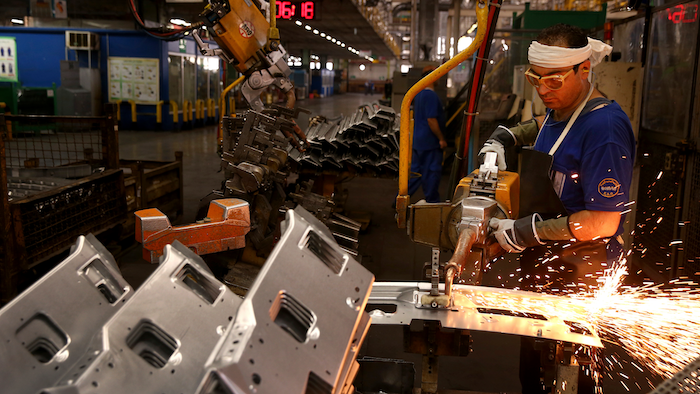 In this Sunday, Sept. 9, 2018 photo, a worker welds parts of a car body at the Iran Khodro automobile manufacturing plant, just outside Tehran.
AP Photo/Ebrahim Noroozi

Across Iran's capital, rush-hour traffic always grinds to a halt, a sea of boxy Renault four-doors and Peugeot coupes all idling their way through the streets of Tehran.

Soon, however, Iran's faltering nuclear deal with world powers may be what causes the country's domestic automotive market to stall out.

As Iran's currency suffers precipitous falls against the U.S. dollar — the rial lost two-thirds of its value against the dollar since President Donald Trump withdrew America from the accord — cars are growing more and more expensive even as tens of thousands clamor to order domestic models online. Meanwhile, Western manufacturers are pulling out of the country and foreign-produced parts are becoming harder to find as Chinese cars fill the void.

"It is clear and obvious that the U.S. is purposefully putting pressure on the people of Iran to instigate discontent" over the auto market, said Mohammad Reza Najfimaneh, the head of the Iranian Specialized Manufacturers of Auto Parts Association.

Iran, one of the Mideast's biggest countries and home to 80 million people, has a huge demand for automobiles. In 2017 alone, Iran produced more than 1.5 million cars, up some 14 percent from the year before, according to a report by Iran's Ministry of Industries, Mines and Trade earlier this year.

Some 90 percent of market share is controlled by two local companies: Iran Khodro, which assembles Peugeot-branded vehicles from kits, and SAIPA, which has made Citroens and Kias. Both manufacturers also build Renaults.

Iran's auto industry suffered under U.S. and Western sanctions, which targeted Iran over fears about its nuclear program. The West worries Iran could use its technology to build atomic bombs. Iran long has said its program is for peaceful purposes.

The 2015 nuclear deal, which saw Iran limit its enrichment of uranium in exchange for the lifting of some sanctions, provided a needed boost to the industry.

Now, however, those firms have pulled back on those plans.

Concern over Iran's domestic auto industry has been high. That was shown in a visit to Iran-Khodro last week by Ali Shamkhani, the secretary of Iran's Supreme National Security Council.

"The enemy in the economic war is after damaging public contentment and the auto industry is one of the front lines in the war," Shamkhani said during his visit.

More than 100,000 people are employed by Iran-Khodro and SAIPA, while another 700,000 Iranians work in industries related to car manufacturing.

There are fears by some business analysts in Iran that any downturn in the auto industry would further worsen unemployment in the country.

Iran's official unemployment rate is 12.3 percent, meaning some 3 million people are out of work, but experts believe it is much higher, especially among university graduates. Those unemployed often try to scrape enough money together to work as taxi drivers in the city, meaning they could be doubly hit.

Meanwhile, the drop in the Iranian rial has made buying a car difficult. The rial traded at 62,000 to the dollar before Trump's pullout from the nuclear deal in May. It has gone as high as 150,000 to $1 since.

"I saved some money to buy an Iranian car, but prices jumped and factories do not provide cars on time," said Mahin Tabrizi, a 45-year-old teacher. "I don't know what I can do."

"Prices of car parts are crazy, all because of the sanctions," said Mahmoud Rahimi, a taxi driver. "I bought brake pads for my car for double the price in less than a year."

Even those who pay for an Iranian car can face delays in having them delivered. Iranian car production reportedly dropped 29 percent in June compared to the same month last year. Analysts blamed that on lack of parts due to currency fluctuation.

Meanwhile, importing a foreign car grows more expensive as the rial drops in value. Iran places import taxes of more than 100 percent on foreign cars. A ban on importing foreign cars also has been in force since April, halting new orders.

"Nearly two years ago, I paid for an imported car, yet they have not delivered it due to upheavals in the rial rate and sanctions," said Reza Piltan, a retired engineer waiting for an SUV by South Korean manufacturer SSangYong.

In the absence of Western car makers, however, China is already starting to show up in the country. A new dealership for Chinese automaker Chery recently opened in Tehran. Iranian lawmaker Vali Maleki, a member of the parliamentary committee on industry, last month suggested that Chinese companies can take over the share of other foreign companies that have left the Iranian market.

"The Chinese cars are selling very well in Iran," car dealer Ali Razavi said. "Their dealerships offer a wide range of methods of leasing and financing that enable many customers to buy a new car for just about $2,000 to $4,000." Those cars are partly assembled in Iran.

Demand is still strong for Iranian-made cars as well, however.

Last week, in less than an hour, 50,000 customers rushed the website of SAIPA to pay nearly $2,000 each to buy cars that the company plans to make in the future. The move is largely an effort by buyers to save on their purchases as the rial continues to fall. Another factory, Iran-Khodro, has a similar plan for selling future cars next week.

"In other countries people pay small advance fees to buy a standard car based on installments," said Fatemeh Azari, whose son last week managed to buy a car on SAIPA's website. "Here, we pay all the money in advance to receive a clunker months later."