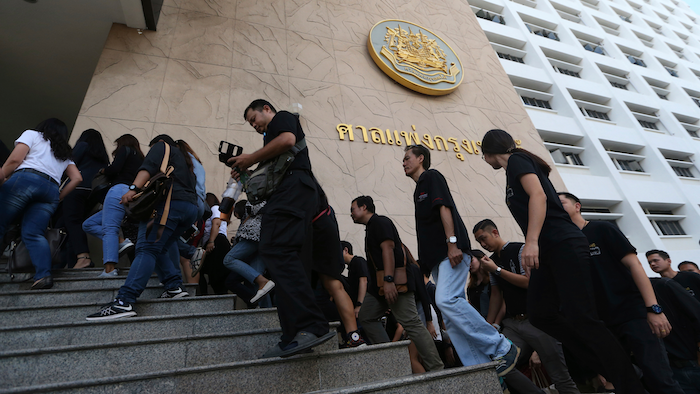 Plaintiffs of Ford cars with bad transmissions walk to inside civil court before a verdict in a class-action lawsuit in Bangkok, Thailand, Friday, Sept. 21, 2018.
AP Photo/Sakchai Lalit

A Thai court has ordered Ford Motor Co. to pay 291 customers a total of about $720,000 in compensation for selling cars equipped with faulty transmissions.

The Bangkok South Civil Court's decision was welcomed Friday as a victory in a country where consumers rarely win redress.

Most of the plaintiffs in the class action suit will get payments of $800 to $8,000 each depending on the number of times and length of time their cars took to be repaired. But 12 plaintiffs were denied compensation because their cars were modified before they were repaired.

None of those taking part in the joint lawsuit decided Friday were reporting injuries.

Ford said in a statement, that it respected the court's verdict.

"We apologize for the inconvenience caused by the Powershift transmission problems and we reiterate that we will work earnestly to take responsibility for fixing them according to our customer service procedures," the company said in a statement issued in Thai.

Faulty transmissions also have been targeted by consumer legal action in the U.S. and Canada.

The group in the Thai lawsuit asked Ford to buy back the cars and sought 600 million Thai baht ($18.5 million) in damages. They can appeal the ruling within 30 days.

One of the plaintiffs, Varoporn Chamsanit, said the five-year warranty on her car's transmission was about to run out and she was unhappy the court's ruling did not mention Ford's future responsibility for repairs.

"On one hand, I feel proud that we consumers got together and made this demand by ourselves and fought a long fight for several years now," she said. "Today the court made it clear that Ford is at fault and awarded compensation for us. I am proud of the result that we received from the court and feel we've gotten a certain degree of justice."

The case was viewed as a milestone for Thailand, where the civil law was amended several years ago to allow class action litigation for the first time, enabling consumers to seek damages for various complaints.

"If we consider this case, beyond the amount of money awarded, this shows that when consumers work together against any big company, we can achieve a victory. When we file a class-action lawsuit, we can prove the damage is widespread and real, not just hearsay," said lawyer Jinna Yamoaum.