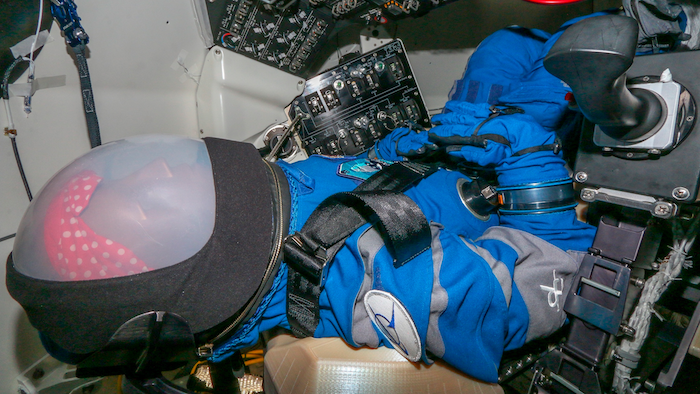 This Nov. 1, 2019 photo provided by Boeing shows Rosie the astronaut test dummy positioned in the space capsule at Kennedy Space Center. The test dummy will be riding to the space station on Boeing’s new Starliner capsule next month, in the first test flight.
Boeing via AP

CAPE CANAVERAL, Fla. (AP) — As Boeing moved its Starliner crew capsule to its pad Thursday for a launch next month, the company revealed the name of the test dummy on board.

Rosie the Astronaut is named after World War II’s Rosie the Riveter. The dummy has hundreds of sensors for the first Starliner test flight to the International Space Station. And it’s wearing Rosie the Riveter’s trademark red polka-dot head scarf, along with a Boeing blue spacesuit.

Boeing said it chose the name given its long history of hiring women, especially during World War II to keep up bomber production.

“She’s flying for everyone on our team who took on the challenge of human spaceflight and said, ‘We can do it,’ ” Leanne Caret, president of Boeing’s defense, space and security unit, said in a statement.

SpaceX turned to the “Alien” movies in naming its test dummy, Ripley, launched aboard a crew Dragon capsule in March.

Flights with NASA astronauts should follow next year for both private companies. The first Starliner crew will include a woman, NASA’s Nicole Mann. She and her two crewmates were present for Thursday’s capsule move.