Why Scientists Sent a Telescope to the Top of the Sky

The ultimate goal of the work is to improve measurements made by satellites that look down at Earth. 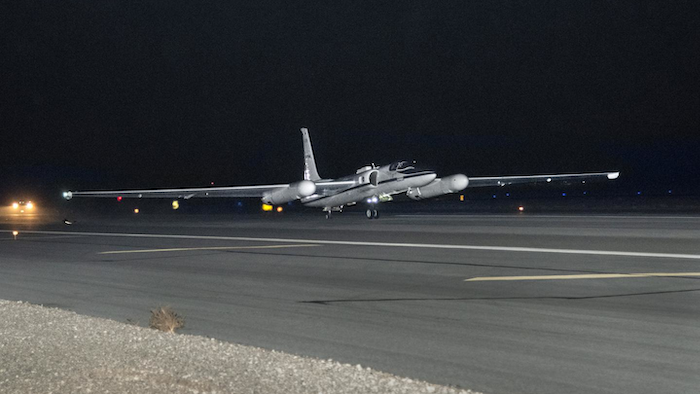 NASA's ER-2 taking off with the air-LUSI moonlight collection equipment on board.
NASA photo/Ken Ulbrich

Last week, scientists from the National Institute of Standards and Technology (NIST), the National Aeronautics and Space Administration (NASA), the United States Geological Survey (USGS) and the University of Guelph sent a telescope to the top of the sky, almost to space itself. The trip was a moonlight-gathering mission that has yielded some of the best measurements ever taken of the brightness, or more specifically the surface reflectance, of Earth's nearest neighbor, the Moon.

The ultimate goal of the work is to improve measurements made by satellites that look down at Earth and help researchers track weather patterns, trends in crop health, the locations of harmful algal blooms in water and much more.

NIST's equipment flew aboard NASA's ER-2, a "near-space plane" that travels as high as 21 kilometers (about 13 miles) above sea level. That kind of distance, twice the cruising altitude of a typical commercial aircraft, got the equipment above 95% of Earth's atmosphere, which interferes with moonlight measurements. The mission, called the Airborne Lunar Spectral Irradiance Mission (air-LUSI), launched from the NASA Armstrong Flight Research Center in California.

Hundreds of Earth-facing satellites provide information about weather and vegetation that allows researchers to predict famines and floods and can help communities plan emergency response and disaster relief. To collect this crucial data, space-based imagers rely on the brightness of different wavelengths -- which it sometimes helps to think of as colors -- of sunlight reflecting off our planet.

To make sure that one satellite camera's "green" isn't another's "yellow," each camera has to be calibrated against a common source while in space. The Moon makes a convenient target because, unlike Earth, it has no atmosphere and its surface changes very little.

In theory, if scientists know the relative alignment of the Sun, Moon and satellite, they should be able to predict the amount of light coming off the Moon. Specifically, scientists are interested in measuring the "spectral irradiance" of light reflected off the Moon -- that is, the amount of energy per unit area in discrete bandwidths of wavelength.

"There is a model that predicts, based on where you're looking from and where the Moon and Sun are, what the spectral irradiance will be," said NIST physicist John Woodward. But because of uncertainties about the Moon's true brightness, even the best calibrations today are only accurate to within 3% to 5%.

Scientists would like to reduce this inaccuracy to less than 1%. The more accurate the calibrations, the more confidence researchers can have in satellite images of Earth.

Why haven't higher accuracies been possible before? Mainly because Earth-based detectors have to peer at moonlight through Earth's atmosphere, which absorbs some wavelengths of light more than others in ways that are not fully predictable, Woodward said.

Launching the detectors into space solves this problem by allowing researchers to gather moonlight unimpeded. But it presents another challenge: Once in space, the instruments are effectively inaccessible, so scientists cannot properly calibrate them before each measurement.

To gather better moonlight data, researchers need two things: a clear view of the Moon with minimum interference from the atmosphere, and physical access to the detectors for frequent calibrations.

How to Catch a Moonbeam

The ER-2 is designed to take scientific equipment above most of the atmosphere for observations lasting hours at a time. Inside the tiny cockpit is room for a single pilot in a space suit. NIST's research equipment is stored in a long container beneath one of the plane's wings. An opening at the top of this pod gives the telescope and camera a clear view of the Moon.

Scientists who want to use the plane's services have to build instruments that meet stringent weight and size specifications -- a challenge for the NIST team.

"It was a lot more engineering than we had anticipated," Woodward said. "At 70,000 feet, there's very little atmospheric pressure. And it's about -60 degrees C, so it's very cold."

In particular, they had to create a temperature- and pressure-controlled container for their data acquisition system, which cannot usually function at such high altitudes.

Weighing about 225 kilograms (approximately 500 pounds) in total, NIST's equipment includes a telescope to collect the moonlight, a camera used to locate the Moon, and an LED light source used to check that the system remains calibrated during the time it takes for the plane to get up to altitude.

The key to keeping uncertainties on these measurements as low as possible comes from the researchers' easy access to the apparatus directly before and after its flight, Woodward said. Just before takeoff and just after landing, the team calibrates the equipment on the ground, using a stable source of light that has already been well characterized. This kind of pre- and post-flight testing wouldn't be possible if the researchers tried to collect the information with a satellite launched into space.

The results from the November flights should be "of significant use to the satellite calibration community," said NIST physicist Stephen Maxwell. In addition, the data will help the NIST team prepare for another moonlight-collection experiment.

Before starting the air-LUSI project, NIST researchers had developed a method to characterize the atmosphere each night, so that it could essentially be subtracted from ground-based measurements. The team is planning to use this method in a moonlight-collection experiment at the Mauna Loa Observatory in Hawaii, at a site about 3,400 meters (11,150 feet) high.

Although a ground-based experiment has many advantages, including longer viewing periods and easier access to equipment, the Mauna Loa system will still need to peer through dozens of kilometers (hundreds of thousands of feet) of moonlight spectrum-distorting atmosphere.

"The data we collected this month looks really nice," Woodward said. "The whole team has done a great job getting this instrument to fly, and the ER-2 team at Armstrong has been a great partner in making this a success."