At least four spacewalks will be needed to fix the $2 billion spectrometer, which searches for dark matter and antimatter. 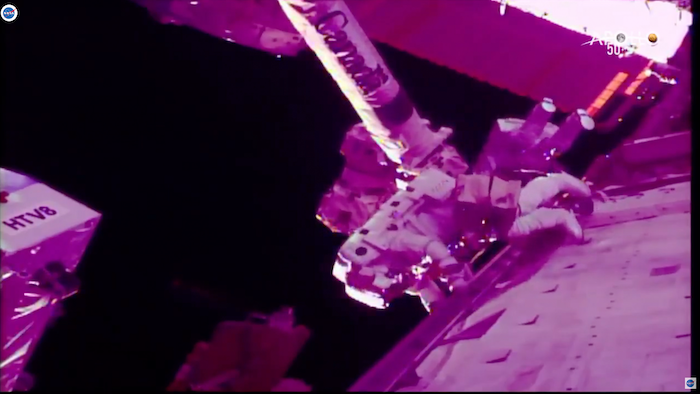 CAPE CANAVERAL, Fla. (AP) — Spacewalking astronauts ventured out for the second week in a row Friday to repair a cosmic ray detector, this time actually cutting into the $2 billion instrument.

NASA likens the repair work to heart bypass surgery. At least four spacewalks are needed to fix the spectrometer, on the hunt for elusive dark matter and antimatter for 8 ½ years. Without a new cooling system, the experiment — led by a Nobel laureate — would end.

NASA considers these the most complicated spacewalks since the Hubble Space Telescope repair missions a few decades ago. The spectrometer was not designed to be operated on in orbit.

A zip tie got away from Parmitano — floating harmlessly into space — as he struggled to free power cables buried in the spectrometer. Mission Control told him not to worry about it.

Parmitano, an Italian, and Morgan, an American, began the repair work last week. They spent years training for the operation before launching in July.

The 7 ½-ton (6,800-kilogram) spectrometer rode to the space station during shuttle Endeavour’s final mission in 2011. If successful, the repairs will keep the device working throughout the life of the station, or another five to 10 years.