The capsule will carry an instrumented dummy, in a white SpaceX spacesuit, to the International Space Station following a planned March 2 liftoff. 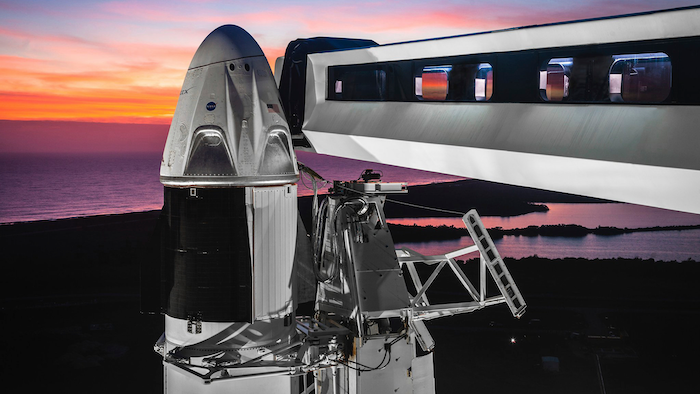 This photo, made available by SpaceX on Feb 6, 2019, shows the Dragon crew capsule atop a Falcon 9 rocket at the launch pad at Kennedy Space Center in Florida.
SpaceX via AP

NASA and SpaceX on Friday approved a first test flight next week of the new commercial Dragon capsule designed for crew.

No one will be aboard, only an instrumented dummy in a white SpaceX spacesuit. But the capsule will still fly to the International Space Station, following its planned March 2 liftoff from NASA's Kennedy Space Center.

Officials gave the green light after conducting a safety review.

A phenomenal amount of work has gone into ensuring the capsule does not endanger the space station and its three occupants as it pulls up and docks, Gerstenmaier said. It will remain at the orbiting lab just under a week before aiming for a splashdown in the Atlantic off Florida. Radiation monitors and supplies are going up, and science samples and used equipment are coming down.

Human spaceflight is the company's core mission, said Hans Koenigsmann, a SpaceX vice president, and for now, there's nothing more important than this endeavor.

"It's a really big deal for SpaceX," he told reporters.

Space X has been making space station shipments since 2012. The private company had to overhaul its cargo capsule for astronauts. If the upcoming demo goes well, two NASA astronauts could strap in for the next test flight this summer. Officials stressed much work remains to be done, with problems possibly solved through redesign, before the capsule is qualified to carry humans.

It would be the first launch of NASA astronauts from U.S. soil in eight years, since NASA's shuttle program ended. They have been riding Russian rockets to get to and from the space station, costing NASA tens of millions of dollars per seat.

The SpaceX Falcon 9 rocket scheduled to soar at 2:48 a.m. EST on March 2 is brand new. NASA does not want recycled boosters for these crew capsule missions. SpaceX plans to conduct a high-altitude launch abort in April, reusing this same capsule.

Boeing is also in the commercial race to transport space station astronauts. Its first Starliner demo is targeted for April, and the second, with astronauts, no earlier than August.