Spacecraft Touches Down on Distant Asteroid

The Hayabusa2 is programmed to extend a pipe and shoot a pinball-like object into the asteroid to blow up material from beneath the surface and collect samples. 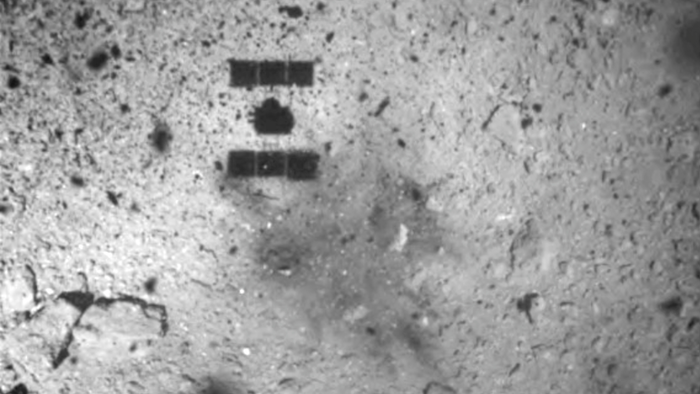 This image released by the Japan Aerospace Exploration Agency shows the shadow of the Hayabusa2 spacecraft after its successful touchdown on the asteroid Ryugu, Friday, Feb. 22, 2019.
JAXA via AP

A Japanese spacecraft touched down on a distant asteroid Friday on a mission to collect material that could provide clues to the origin of the solar system and life on Earth.

Workers at the Japan Aerospace Exploration Agency control center applauded Friday as a signal sent from space indicated the Hayabusa2 spacecraft had touched down.

During the touchdown, Hayabusa2 is programmed to extend a pipe and shoot a pinball-like object into the asteroid to blow up material from beneath the surface. If that succeeds, the craft would then collect samples to eventually be sent back to Earth. Three such touchdowns are planned.

Japanese Education Minister Masahiko Shibayama said the space agency had concluded from its data after the first touchdown that the steps to collect samples were performed successfully.

JAXA, as the Japanese space agency is known, has likened the touchdown attempts to trying to land on a baseball mound from the spacecraft's operating location of 20 kilometers (12 miles) above the asteroid.

The asteroid, named Ryugu after an undersea palace in a Japanese folktale, is about 900 meters (3,000 feet) in diameter and 280 million kilometers (170 million miles) from Earth.