The company mated a LauncherOne rocket to a special Boeing 747 and will soon begin a series of flights that will culminate with a drop test. 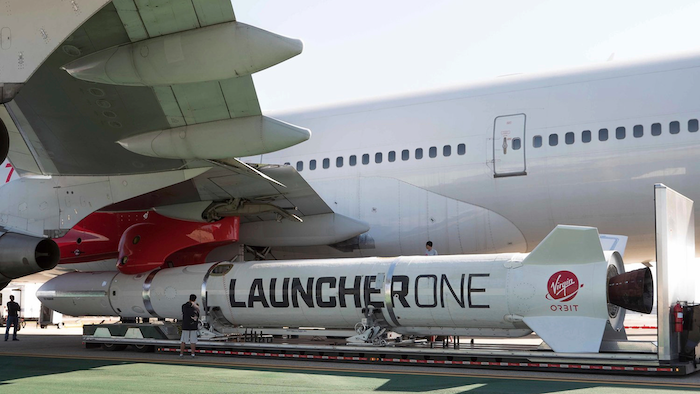 In this Thursday, Oct. 25, 2018, photo released by Virgin Orbit, a completed LauncherOne rocket hangs from the wing of Cosmic Girl, a special Boeing 747 aircraft that is used as the rocket's "flying launch pad," at the Long Beach Airport in Long Beach, Calif.
Greg Robinson/Virgin Orbit via AP

The company says this week it mated a LauncherOne rocket to a special Boeing 747 at Long Beach Airport and will soon begin a series of flights that will culminate with a drop test in which the booster will be released from beneath the jet's left wing.

The system is intended to carry small satellites into orbit.

Virgin Orbit is a sister company of Virgin Galactic, which is developing an air-launched rocket plane for carrying tourists on suborbital flights into space.

Virgin Orbit said it already has hundreds of millions of dollars worth of launches on contract for a wide range of customers including NASA and the U.S. Defense Department.