The heavy equipment giant was one of William Barr’s clients before he was tabbed to head the Justice Department.

Two years ago, the U.S. Department of Justice was in the midst of an investigation into construction and mining equipment giant Caterpillar over allegations of tax fraud.

The Internal Revenue Service originally sought $1 billion from the company in 2015 over its shifting of some profits to a subsidiary in Switzerland, but that total more than doubled as the agency reviewed Caterpillar’s taxes from additional years. The tab climbed to $2.3 billion by 2017, when federal authorities raided the company’s Illinois headquarters and two other facilities.

Caterpillar has told investors that the case remains ongoing — and, technically, it is — but a new report says the investigation has been essentially “stalled” since late 2018.

In mid-December of that year, an email obtained by Reuters indicated that agents had been instructed by DOJ officials in Washington — including the department’s tax division and then-Deputy Attorney General Rod Rosenstein — to take “no further action” in the criminal probe of Caterpillar.

The reason remains a mystery, but Reuters noted that it came days after President Trump nominated William Barr to serve as U.S. attorney general. Barr, at the time, was serving as Caterpillar’s lead attorney — he was hired by CEO Jim Umpleby in the wake of the 2017 raids.

The report noted that conflicts of interest can arise when attorneys move between private practice and government positions, but an expert told Reuters that halting a case involving a former client would be highly unusual.

The order, however, would not have come from Barr, who was not yet confirmed as attorney general. He said during his confirmation hearings that he could not discuss his work for Caterpillar, citing attorney-client privilege. The Justice Department told Reuters that Barr had recused himself from any discussions involving Caterpillar after his confirmation.

Caterpillar has long maintained that its tax strategy was legal and that it has done nothing wrong.

Retailer to Pay Workers to Get Vaccine

Extinguisher failures were linked to some 16 injuries and at least one fatality.
Jan 11th, 2021

Jeff Immelt has been retired since 2017, but shareholders still want answers.
Jan 8th, 2021

The initiative was reportedly announced in response to a shareholder proposal to cut executive pay.
Jan 7th, 2021

Critics blasted the phishing test amid the economic uncertainty of the pandemic.
Jan 6th, 2021

The permanent jobs come with some perks.
Jan 6th, 2021

Authorities are treating the incident as a "work-related revenge attack."
Jan 5th, 2021 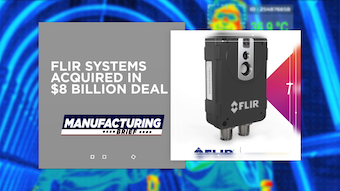 FLIR Systems Acquired in $8B Deal

The companies’ products are considered "uniquely complementary with minimal overlap."
Jan 5th, 2021
Follow Us
Most Recent