The derailment was the first involving a commercial TGV train with passengers on board. 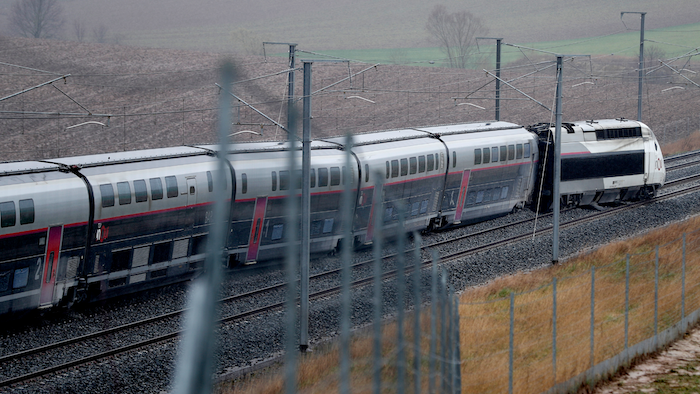 PARIS (AP) — One of France's vaunted high-speed trains derailed Thursday morning on a trip to Paris, injuring the driver and 20 other people, officials said.

The driver, who was seriously injured, managed to slam on the emergency brakes and bring the train to a halt. The derailment was the first involving a commercially operated TGV train with passengers on board.

The high-speed trains started running in 1981. A fatal accident involving a TGV test train took place on the same rail line in 2015 before its official opening.

The train, carrying 300 passengers, was heading from Colmar in eastern France to the capital and traveling at a speed of 270 kph (170 mph) when it jumped the tracks.

The derailment opened a gash on the pointed nose of the sleek train, which stayed upright. Its side was scratched and some windows were cracked.

The SNCF said it was the first time that a commercially operated TGV train has derailed since the service was inaugurated in 1981, between Paris and the southern city of Lyon. TGV stands for “Train à Grande Vitesse,” or high-speed train.

The seriously injured train driver was evacuated by helicopter.

Passengers told French media they felt a bang before the train slowed and stopped.

An investigation will determine whether the train struck an earth bank that collapsed close to the track.

In November 2015, a TGV test train derailed in Eckwersheim, in eastern France, during trials for a new line. One person died and 42 were injured, mostly SNCF employees and guest passengers.