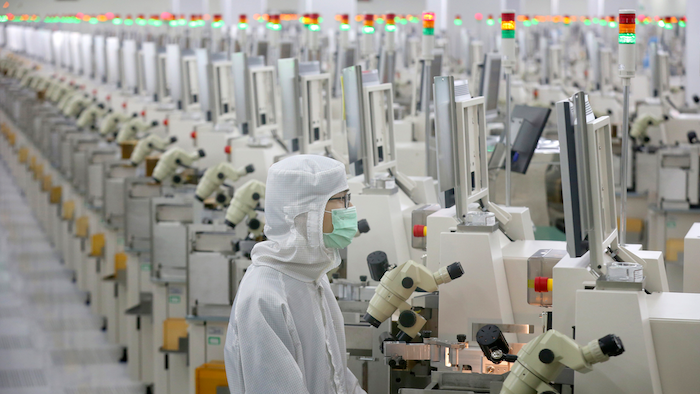 A worker at a microelectronics factory in Nantong, China, Feb. 20, 2020.
Chinatopix via AP

GENEVA (AP) — A Singaporean official defeated a candidate from China in a leadership contest for the U.N.'s intellectual property body, which was swept into a rift between Washington and Beijing over claims of Chinese theft of technological know-how.

Daren Tang, 47, the CEO of Singapore's intellectual property office, won a crucial nomination to become the next director-general of the World Intellectual Property Organization over China's Wang Binyang, a veteran at the agency.

The “coordination committee” handed a 55-28 victory to Tang in a final round of voting that began Wednesday with five candidates vying to replace the agency's outgoing chief, Francis Gurry of Australia.

The fight over the post pit the United States against Wang, prompting the Chinese ambassador to criticize an “attack” against a “competent” civil servant. She would have become the agency's first woman chief at a time when the U.N. is promoting gender parity in high office.

WIPO's general assembly has final say in May, but it has never rejected a committee nominee since the 192-country agency was created in 1967.

“We look forward to working closely with him during his tenure as Director General to advance WIPO’s core mission of safeguarding intellectual property as a means of driving innovation, investment, and economic opportunity,” Pompeo said in a statement.

Top U.S. officials including White House trade adviser Peter Navarro had spoken out against Wang, accusing Beijing of stealing intellectual property and arguing that China's choice would reflect badly on an agency devoted to protecting it.

The stakes are high: WIPO is said to be the only U.N. specialized agency that consistently brings in a surplus, mainly through hits patent- and trademark-filing process that costs companies money to help protect their intellectual property overseas.

The United States and other Western allies have long expressed concern about China’s approach to intellectual property, which has involved requiring companies that want to operate in its large, fast-growing market to share their technical savvy with local partners.

The standoff to replace Director-General Gurry, who was not standing for re-election, comes as China has been flexing its intellectual and diplomatic muscle in recent years. By WIPO's own count late last year, China alone accounted for nearly half of all patent filings worldwide.

China's ambassador in Geneva, Chen Xu, insisted Wednesday's result was “not a defeat.”

“The whole process, I think, is a very strong indication of China’s readiness to make more contributions to the international community,” he said. “We tried our best.”