He cited an "abominable election atmosphere." 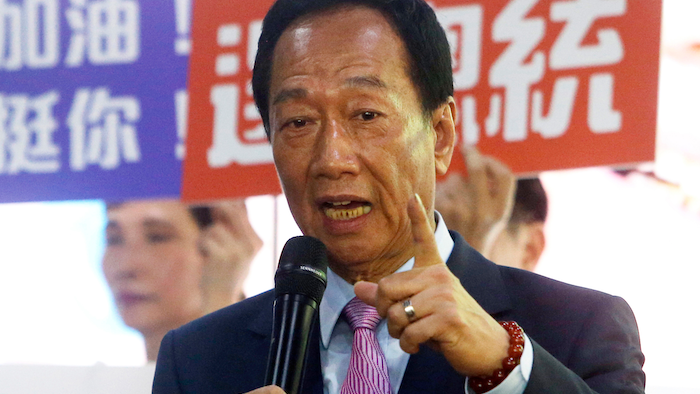 In this June 21, 2019, file photo, Terry Gou, chairman of Foxconn, the world's largest contract assembler of consumer electronics, speaks to the media after the company's annual shareholders meeting in New Taipei City, Taiwan. Gou has given up on making a bid for Taiwan's presidency. Gao announced his decision in a statement late Monday, Sept. 16, 2019, one day before a deadline to register for the race.
AP Photo/Chiang Ying-ying, File

TAIPEI, Taiwan (AP) — Former Foxconn CEO Terry Gou has given up on making an independent bid for Taiwan's presidency, citing an "abominable election atmosphere" and bullying of his supporters.

Gou announced his decision in a statement late Monday, one day before a deadline to register for the race.

The move leaves two main candidates in the January election — incumbent President Tsai Ing-wen of the Democratic Progressive Party and Han Kuo-yu, a populist mayor who defeated Gou in the Nationalist Party primary in July.

Gou stepped down in June as head of Foxconn, a company he founded and built into a leading contract manufacturer of the iPhone and other consumer electronics.

He resigned from the Nationalist Party last week, fueling speculation that he would run as an independent.

His possible entry into the race threatened to divide the Nationalists, who wanted party members to unite behind their candidate. Han, the mayor of the port city of Kaohsiung, is trailing Tsai in the polls.

In a video message posted on Facebook on Tuesday, Gou blamed personal and factional interests for dividing society.

"I am not willing to participate and cannot bear seeing my supporters being bullied," he said.