The Black Hawk UH-60 crashed into a golf course in Maryland during a training mission last spring. 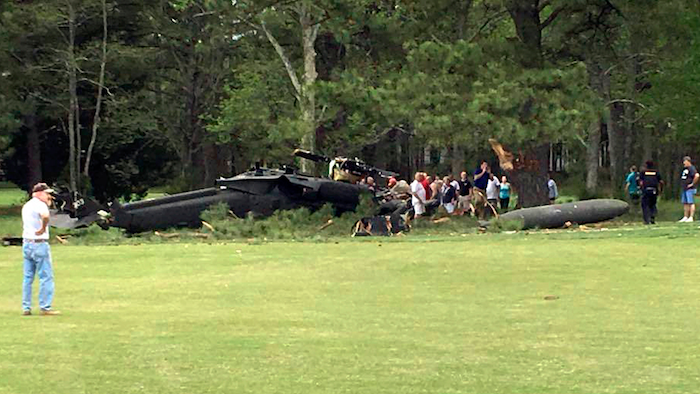 The wife of an Army specialist killed in a Black Hawk helicopter crash in Maryland last year and two other soldiers who were critically injured sued Sikorsky Aircraft on Monday, alleging the tail rotor system was defective.

The Black Hawk UH-60 crashed into a golf course in Leonardtown, Maryland, on April 17, 2017, about 60 miles (100 kilometers) southeast of Washington. The helicopter was one of three on a training mission.

Tomlin, 22, who grew up in the Chapel Hill, Tennessee, area, died at the scene. Onoda, who was the pilot, and Nicholas suffered permanent physical and psychological injuries, the lawsuit says. All three were stationed at Fort Belvoir, Virginia.

About 22 minutes into the flight, there were "violent vibrations," and the crew radioed there was a tail rotor malfunction, the lawsuit says. After the crew announced they were going to try to land, the tail rotor gearbox broke off the helicopter, and the chopper spun out of control and struck a tree and the ground, the suit says.

"The men and women in the Armed Forces deserve equipment that meets the highest standards of safety and reliability," said Timothy Loranger, the plaintiffs' lawyer and a Marine Corps veteran.

"Selling aircraft to the military knowing it could be defective and dangerous is a serious breach of the public trust," he said in a statement. "While no legal remedy will ever undo the harm caused by this senseless tragedy, justice for our clients will hopefully deter this type of negligent behavior in the future."

The lawsuit also seeks damages for Jessica Tomlin and Faith Onoda's loss of consortium with their husbands.