The U.S military gave a $2 million grant to a University of Arizona research team, with the hope the technology could one day help wounded soldiers. 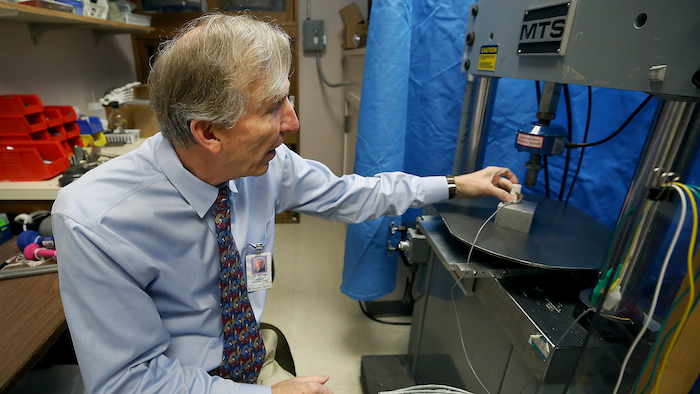 In this Dec. 17, 2018 photo, John Szivek of the University of Arizona explains how the scaffold made from a 3-D printer is tested.
Mamta Popat /Arizona Daily Star via AP

The U.S military has given a $2 million grant to a University of Arizona research team developing bone re-growth technology, with the hope it could one day help wounded soldiers.

The five-year grant from the Department of Defense will fund the study of regenerating segments of missing bone through a combination of adult stem cells and 3D printing, the Arizona Daily Star reports .

John Szivek, a professor of orthopedic surgery at the Tucson school and a biomedical engineer, is leading the group. Team members use a 3D printer to construct a piece of plastic scaffolding they designed. The scaffolding has grooves and small cavities and a sponge-like structure. It can be customized for each patient. The scaffolding will then be seeded with the patient's stem cells and calcium to expedite the process.

"We're trying to find a way to regrow that segment of bone using a person's own living cells," Szivek said.

Currently, most bone-shattering injuries are helped with a support rod and a cadaver bone. But the cadaver bone inevitably cracks and breaks within a couple of years, according to Szivek. Also, the living bone can connect to a cadaver bone at both ends but doesn't connect across it to make one piece of living bone.

David Margolis, a co-investigator on the grant and a doctor in orthopedic surgery, said most of the options out there leave patients disappointed.

"Nothing is guaranteed to work, and each one has different risks and benefits," Margolis said. "None give you back what you had before."

So far, the team has tested its methods only on sheep. But its members were excited by the results. According to Szivek, there was a complete bridging between bone segments within two months. And within six months, they saw remodeling or the process of smoothing out the new bone.

"We really want to push the system to run as quickly as possible. We want it to form any kind of bone at all. It doesn't matter — it could be the crappiest bone on earth, but once it's there, it will remodel itself," he said.

The team also examined how exercise affects the recovery rate. Szivek wants to use the grant money to try placing sensors into a new bone so they can get feedback on the impact of exercise. He thinks one day they can have sensors that send updates to patients' phones. They will know if they are running or jumping too vigorously.

The technology would also one day be made available to civilians such as people injured in car crashes or surgical cancer patients who had bone removed.