The National Institutes of Health is pushing for development of what its director has called a "pain-o-meter." 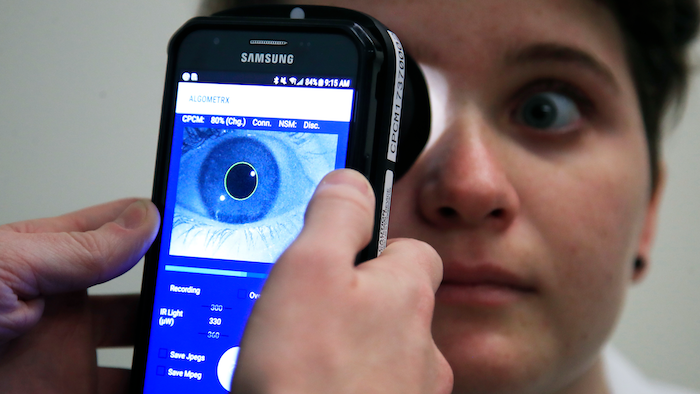 Over and over, 17-year-old Sarah Taylor struggled to make doctors understand her sometimes debilitating levels of pain, first from joint-damaging childhood arthritis and then from fibromyalgia.

"It's really hard when people can't see how much pain you're in, because they have to take your word on it and sometimes, they don't quite believe you," she said.

Now scientists are peeking into Sarah's eyes to track how her pupils react when she's hurting and when she's not — part of a quest to develop the first objective way to measure pain.

"If we can't measure pain, we can't fix it," said Dr. Julia Finkel, a pediatric anesthesiologist at Children's National Medical Center in Washington, who invented the experimental eye-tracking device.

At just about every doctor's visit you'll get your temperature, heart rate and blood pressure measured. But there's no stethoscope for pain. Patients must convey how bad it is using that 10-point scale or emoji-style charts that show faces turning from smiles to frowns.

That's problematic for lots of reasons. Doctors and nurses have to guess at babies' pain by their cries and squirms, for example. The aching that one person rates a 7 might be a 4 to someone who's more used to serious pain or genetically more tolerant. Patient-to-patient variability makes it hard to test if potential new painkillers really work.

Nor do self-ratings determine what kind of pain someone has — one reason for trial-and-error treatment. Are opioids necessary? Or is the pain, like Sarah's, better suited to nerve-targeting medicines?

"It's very frustrating to be in pain and you have to wait like six weeks, two months, to see if the drug's working," said Sarah, who uses a combination of medications, acupuncture and lots of exercise to counter her pain.

The National Institutes of Health is pushing for development of what its director, Dr. Francis Collins, has called a "pain-o-meter." Spurred by the opioid crisis , the goal isn't just to signal how much pain someone's in. It's also to determine what kind it is and what drug might be the most effective.

"We're not creating a lie detector for pain," stressed David Thomas of NIH's National Institute on Drug Abuse, who oversees the research. "We do not want to lose the patient voice."

Around the country, NIH-funded scientists have begun studies of brain scans, pupil reactions and other possible markers of pain in hopes of finally "seeing" the ouch so they can better treat it. It's early-stage research, and it's not clear how soon any of the attempts might pan out.

"There won't be a single signature of pain," Thomas predicted. "My vision is that someday we'll pull these different metrics together for something of a fingerprint of pain."

NIH estimates 25 million people in the U.S. experience daily pain. Most days Sarah Taylor is one of them. Now living in Potomac, Maryland, she was a toddler in her native Australia when the swollen, aching joints of juvenile arthritis appeared. She's had migraines and spinal inflammation. Then two years ago, the body-wide pain of fibromyalgia struck; a flare-up last winter hospitalized her for two weeks.

One recent morning, Sarah climbed onto an acupuncture table at Children's National, rated that day's pain a not-too-bad 3, and opened her eyes wide for the experimental pain test.

"There'll be a flash of light for 10 seconds. All you have to do is try not to blink," researcher Kevin Jackson told Sarah as he lined up the pupil-tracking device, mounted on a smartphone.

The eyes offer a window to pain centers in the brain, said Finkel, who directs pain research at Children's Sheikh Zayed Institute for Pediatric Surgical Innovation.

How? Some pain-sensing nerves transmit "ouch" signals to the brain along pathways that also alter muscles of the pupils as they react to different stimuli. Finkel's device tracks pupillary reactions to light or to non-painful stimulation of certain nerve fibers, aiming to link different patterns to different intensities and types of pain.

Consider the shooting hip and leg pain of sciatica: "Everyone knows someone who's been started on oxycodone for their sciatic nerve pain. And they'll tell you that they feel it — it still hurts — and they just don't care," Finkel said.

What's going on? An opioid like oxycodone brings some relief by dulling the perception of pain but not its transmission — while a different kind of drug might block the pain by targeting the culprit nerve fiber, she said.

Certain medications also can be detected by other changes in a resting pupil, she said. Last month the Food and Drug Administration announced it would help AlgometRx, a biotech company Finkel founded, speed development of the device as a rapid drug screen.

Looking deeper than the eyes, scientists at Harvard and Massachusetts General Hospital found MRI scans revealed patterns of inflammation in the brain that identified either fibromyalgia or chronic back pain.

Other researchers have found changes in brain activity — where different areas "light up" on scans — that signal certain types of pain. Still others are using electrodes on the scalp to measure pain through brain waves.

Ultimately, NIH wants to uncover biological markers that explain why some people recover from acute pain while others develop hard-to-treat chronic pain.

"Your brain changes with pain," Thomas explained. "A zero-to-10 scale or a happy-face scale doesn't capture anywhere near the totality of the pain experience."