Orders for investment goods, such as factory machinery, were down more than 22%. 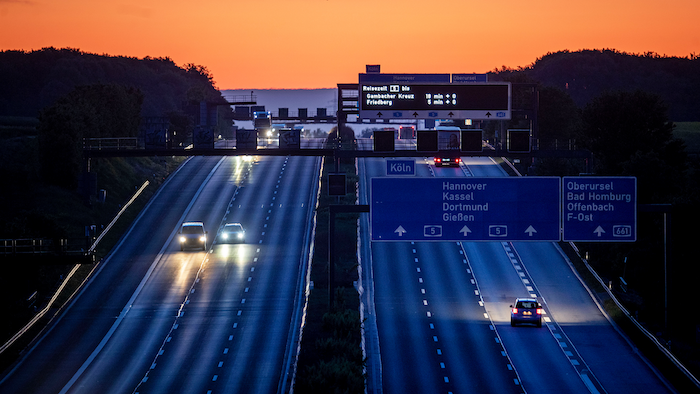 Cars and trucks on a relatively empty highway in Frankfurt, Germany, May 6, 2020.
AP Photo/Michael Probst

BERLIN (AP) — German factory orders plunged by 15.6% in March compared with the previous month as countries around Europe and beyond started shutting down public life and businesses, official data showed Wednesday.

Demand from both domestic and foreign customers for goods made in Europe's biggest economy plummeted by a similar amount, the Economy Ministry said. Orders from inside Germany were off 14.8%; demand from elsewhere in the 19-nation eurozone dropped 17.9%; and orders from other countries fell 15%.

There was a particularly steep drop in orders for investment goods such as factory machinery, which were down 22.6%.

March was the month in which the coronavirus pandemic hit Europe, with first Italy and then other countries imposing sweeping restrictions on public life and businesses. Germany itself started shutting down in mid-March. It never ordered factories closed, but companies did stop production in some areas — such as the automaking sector — and supply chains were disrupted.

Data for January and February were relatively healthy, so orders dropped only 2.7% in the first quarter compared with last year's fourth quarter, the Economy Ministry said.

Separate data released by an association that represents German automakers showed a drastic decline in car sales in April. The German Association of the Automotive Industry said that 61% fewer new cars were registered in Germany last month than a year earlier. The total of 120,800 cars was the lowest recorded since German reunification in 1990.

Car exports from Germany dropped 94% to 17,600, while production all but stopped — dropping 97% to 10,900 cars. The association said that the number of orders from abroad was down 47% last month, but didn't give an absolute figure.

Germany is now in the process of gradually loosening restrictions imposed in March, as are many other European countries, but the economic impact is expected to be deep.