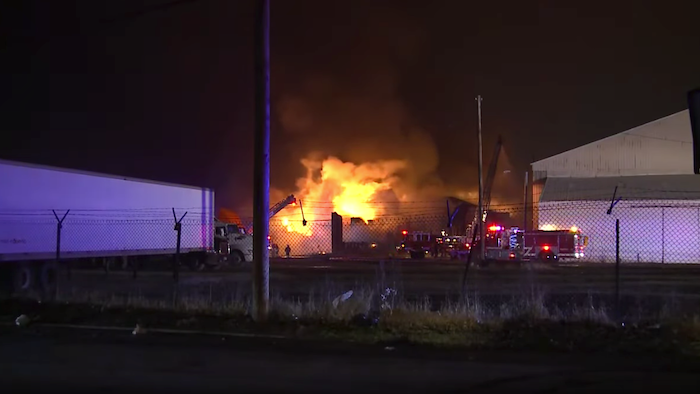 MADISON, Ill. (AP) — A fire swept through a recycling business in southwestern Illinois early Wednesday, forcing the evacuation of nearby homes, officials said.

The fire began about 2 a.m. Wednesday at a Madison, Illinois, industrial park in the Metro-East area near St. Louis. Television footage showed flames leaping from buildings at Interco, a recycling company that recycles metals, computers and electronics.

Firefighters from at least five departments, including the city of St. Louis, battled the fire, which Madison Mayor John Hamm said later Wednesday morning had been brought under control.

He said four separate buildings had collapsed and officials were trying to track down the building's owners to determine what was inside those structures.

“At this time we can't actually know what's in those buildings," Hamm told KMOV-TV.

A message seeking an update on the fire was left Wednesday morning with Madison city officials by The Associated Press.

Anthony Newson, who lives across from the recycling center, said he was awakened by two loud booms and then saw the flames.

"I look out my door and it was like an inferno. I mean, fire everywhere," he told KSDK-TV.

Newson said he was gathering up his belongings and getting ready to leave when first responders came to his door and told him he needed to evacuate.