Some Wuhan Companies Allowed to Reopen 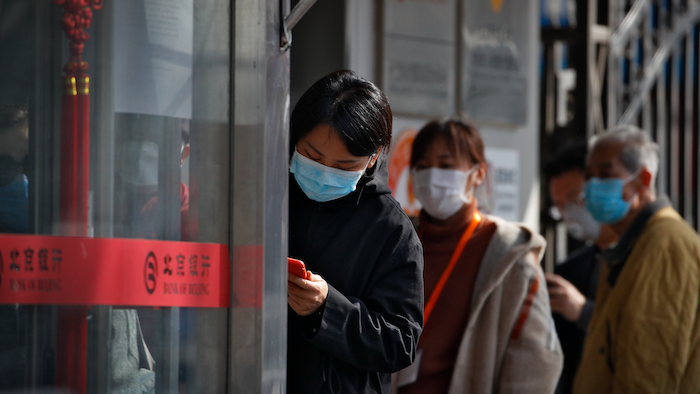 People wait to get temperature checks before entering a bank in Beijing, March 11, 2020.
AP Photo/Andy Wong

BEIJING (AP) — The province at the center of China’s virus outbreak began allowing factories and some other businesses to reopen Wednesday in a show of confidence that Beijing is gaining control over the disease that devastated its economy.

Chinese leaders are trying to revive business after the most sweeping anti-disease controls ever imposed shut down manufacturing, travel and other industries in late January, sending shock waves through the global economy.

On Tuesday, President Xi Jinping visited Wuhan, the city where the coronavirus emerged in December, in a sign China believes its crisis might be passing even as the United States and European governments tighten anti-disease controls.

Manufacturers, food processors and other businesses in Wuhan that are essential to the national economy or providing daily necessities can resume operation, the Hubei provincial government announced. The city of 11 million people, about 700 kilometers (450 miles) west of Shanghai, is the manufacturing hub of central China.

The changes are meant to “accelerate establishment of economic and social operation order, compatible with the epidemic prevention,” said a government statement. Companies that reopen are required to make “epidemic control” plans, inspect employees for signs of disease and keep workplaces disinfected.

The statement said controls that have kept most people in Wuhan and surrounding cities in their homes for seven weeks will be eased to allow employees to go to work but movement will be tightly controlled.

Companies in and around Wuhan that are reopening include makers of electric car batteries, pharmaceuticals, telecom components and Chinese-style liquor, according to news reports.

Controls have been eased in other areas of China that are considered at low disease risk, but travel and other curbs still are in place. Factories are reopening, but automakers and other industries aren't expected to return to normal production until at least mid-April due to disruption to supplies of components.

A foreign ministry spokesman expressed confidence the impact on China's economy is “temporary and limited.” He rejected suggestions companies should move operations out of the country or find foreign suppliers of components and raw materials to reduce the risk of future disruptions.

"Factors and conditions that support the high-quality development of the Chinese economy have not changed,” said the spokesman, Geng Shuang.

“With the recent progress China has made in domestic epidemic prevention and control, key industries including foreign-funded enterprises and leading enterprises have resumed work,” Geng said. “It is neither realistic nor wise to artificially cut off the global supply chain, nor even tout ‘transfer’ and ‘decoupling’ of the supply chain.”

Also Wednesday, officials at a Cabinet meeting led by Premier Li Keqiang, China's No. 2 leader, promised easier credit and other aid to help companies reopen, according to a statement read on the state TV evening news.

The officials promised “relief policies will be equally enjoyed by domestic and foreign enterprises,” the statement said.

More than 80,000 people in China have been diagnosed with the coronavirus. Nearly 60,000 have recovered.

For most people, the virus causes only mild or moderate symptoms, such as fever and cough. For some, especially older adults and people who already have health problems, it can cause more severe illness, including pneumonia. Most people recover in about two weeks, though those with more severe illness may take up to six weeks to recover.

Most access to Wuhan was suspended on Jan. 23 in a dramatic effort to contain the outbreak. Residents were ordered to stay in their homes.

Restrictions spread to cities with a total of 60 million people. The Lunar New Year holiday was extended to keep factories and offices closed. The government canceled group tours and closed shopping malls, restaurants and cinemas nationwide.

That jolted global auto, smartphone and other brands that look to China as a manufacturing center and a major market.

In high-risk areas of Hubei outside Wuhan, businesses that supply food and daily necessities, freight handling and some other services will be allowed to resume, the statement said. It did not say when restrictions on other industries might end.

Even in low-risk areas, businesses such as cinemas, hair salons and karaoke bars “will not resume until the epidemic situation is resolved,” the statement said.

In high-risk areas including Wuhan, people who are free of infection may use “point to point” transportation provided by the government or employers, the provincial government statement said.

Public buses and subways will resume operating in low and medium-risk areas but Wuhan's transit system will remain shut down, it said.

Wuhan and nearby areas of Hubei are home to factories for global automakers and suppliers of components for electronics, smartphones and other industries. The province accounts for about 6% of China's auto production.

Groupe Renault, one of a number of global auto brands that operate factories in Wuhan with Chinese partners, said it tentatively plans to restart production on March 20 but is awaiting a final government decision.