Prices tumbled so sharply at the opening bell that trading was briefly halted. 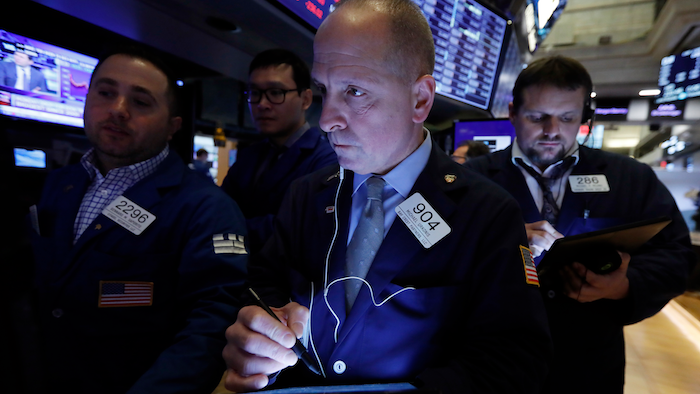 NEW YORK (AP) — U.S. companies buffeted by supply chain chaos and a growing awareness of the scope of a viral outbreak are facing new threats to begin the week. The price of U.S. crude fell as much as 34% to $27.34 a barrel, the lowest price since early 2016, as an oil war between Saudi Arabia and Russia broke out. Typically, falling energy prices are good for markets and for businesses. However, in times of economic duress, energy prices come to be seen as a barometer of the global economy overall. That appeared to be what happened Monday with crude prices suffering the largest single-day decline since the 1991 Gulf War. Here are some of the developments that are affecting businesses and potentially, the economy as a whole.

MARKET MESS: Stock prices tumbled so sharply at the opening bell a circuit breaker meant to slow down panic trading was triggered, halting all activity for 15 minutes. That appeared to work as intended, but the Dow, S&P 500 and Nasdaq all ended the day with losses of more than 7%. Treasury bonds continue to grow more expensive with so many investors looking for a safe place to park their money. The 30-year Treasury yield fell to all-time lows below 1%. The 10-year Treasury, which fell below 1% last week, is plumbed new depths Monday.

ENERGY DRAIN: A clash between Saudi Arabia and Russia is sending shock waves through energy markets, with wide-ranging implications for consumers, industries, and of course, big oil companies. Energy companies had already been pulling back on spending with clear signs of slowing global economic growth. Investors dumped shares of some of the biggest producers in the world. On Monday, stock in Marathon Oil plunged 47%. Occidental Petroleum slumped 52%. The winners, at least at the pump, will be consumers, though no one knows when gasoline prices will fall.

Diamondback Energy on Monday said it would reduce the number of well activation crews by a third. It also expects to drop two drilling rigs next month and a third later in the second quarter. Parsley Energy is cutting back, too. Energy analysts at Stifel downgraded a dozen companies in the sector, citing the clash between Saudi Arabia and Russia.

NO OCEAN CRUISE: Since a ship was quarantined for two weeks off of Yokohama, Japan, few sectors have been harder hit by the virus than the cruise industry. It got worse over the weekend. The U.S. State Department has issued an advisory against travel on cruise ships, particularly for travelers with underlying health conditions. Separately, the CDC noted an “increased risk of infection of COVID-19 in a cruise ship environment.” On Monday, shares of Royal Caribbean Cruises fell 25%, shares of Norwegian Cruise Line fell 25% to an all-time low. Carnival fell 20%.

The Grand Princess, meanwhile, pulled into the Port of Oakland with more than 3,500 people aboard — 21 confirmed to be infected with the new virus. The Regal Princess cruise ship was finally allowed to pull into a Florida port and passengers began disembarking after two crew members tested negative for coronavirus.

DODGING LODGING: Another sector within the hospitality industry, hotels, have been heavily damaged by the spread of the virus. With companies canceling or postponing business travel and conventions, and airlines suspending flights, room cancellations, or rooms never booked, are soaring. Analysts with Raymond James said Monday that most investors have been “overly optimistic” about the impact on hotels. Shares in Hyatt Hotels fell almost 8% Monday. Hilton fell more than 4%.

MALLED: The spread of the virus is hitting closer to home with the majority of states now reporting cases of COVID-19. That will affect the behavior of millions of people in public, including trips to the mall. On Monday, shares of mall operators sild. Simon Property Group lost 13.4%, Macerich shed 15% and Tanger Factory Outlet Centers gave back almost 14%.

BANKS SHOT: Banks took a body blow last week when the U.S. Fed made a surprise cut to benchmark interest rates to protect the economy. Banks rely on interest payments from loans to generate capital, and they've already been operating in an extraordinarily low rate environment. On Monday, Morgan Stanley's chief U.S. economist, Ellen Zentner, said she now expects the Federal Reserve to follow its 50 basis point intermeeting rate cut with another 50 basis point interest rate cut in March, bringing the target range for the federal funds rate to 0.50-0.75%. Zentner also expects the March rate cut will be followed by a 25 basis point rate cut at the April meeting, bringing the fed funds rate into a 0.25-0.50% target range. JP Morgan Chase tumbled 13.6%, while Bank of America lost 14.7% and Citi fell around 16%.

Regional banks were hit even harder, some because they have heavily funded the energy industry. Regions Financial, Citizens Financial and Comerica fell about 19%

STAY HOME: More companies are telling employees to work from home, if possible. On Monday, IBM said it sent a note to all of its employees who live or work in New York City and Westchester, encouraging them to work from home if their job permits, until further notice.