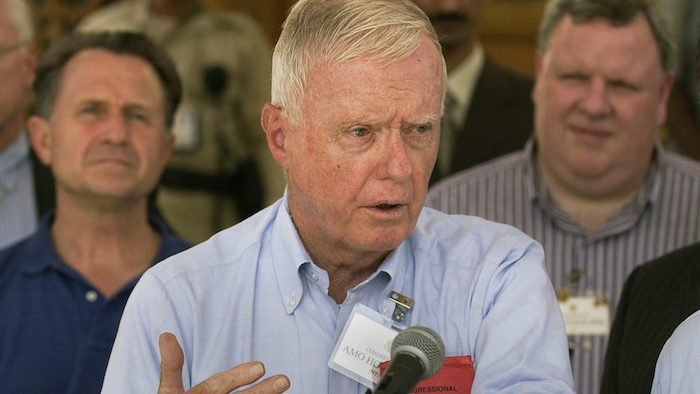 CORNING, N.Y. (AP) — Amory Houghton Jr., who led his family's glass company in upstate New York and later spent nearly two decades in Congress as a Republican with a reputation for breaking with his party, died Wednesday. He was 93.

Houghton, who was known as simply “Amo,” was first elected at age 60, after spending nearly two decades as chief executive of Corning Glass Works, which was started by his great-great-grandfather in 1851 and became one of the world's biggest glass makers.

Houghton died at his home in Corning, New York, the company, now Corning Inc., announced in a post on its website. A cause of death was not given.

The descendant of businessmen and ambassadors, Houghton was elected in 1986 to represent the Corning area and its blue-collar families that would be hit hard by an economic downturn. Considered a moderate Republican who was able to get along with politicians across the aisle, Houghton was reelected eight times.

Among the richest politicians of the time, due to Corning stock and other investments, he was a fiscal conservative and social-policy moderate who often strayed from the party line during times of contention and war.

“A natural consensus builder, he never pretended to be someone he wasn’t and used his patient salesmanship to defuse partisan disagreements in order to tackle problems the only way that made sense to him — cooperatively,” according to the obituary posted by a funeral home.

Houghton, who supported abortion rights and advocated for additional funding for the arts, was one of six Republicans to vote against a 2002 resolution that gave President George W. Bush the broad authority to invade Iraq. He also voted against huge tax cuts that were widely supported by Republican lawmakers during the Bush administration.

Four years earlier, Houghton and just a handful of other Republicans opted not to vote for the impeachment of President Bill Clinton for lying about his affair with a White House intern. He also voted against a charge of obstruction of justice.

In 1997, Houghton founded the Republican Main Street Partnership, a group of moderate GOP members dedicated “to conservative, pragmatic government that works to better American communities across the country” and “advancing common-sense policies that can command bipartisan support," according to the organization's website.

Houghton would again break with some of his colleagues on minimum wage and a ban on military rifles for public use. He supported higher wages and — while a member of the National Rifle Association — a ban on military-style assault weapons.

“I am a member of the NRA,” Houghton told the Los Angeles Times. “It’s going to hurt me politically — no question — but I think it’s the right thing to do.”

Houghton's committee assignments included Foreign Affairs, Budget and Ways and Means. He also served as the co-chairman of the Faith and Politics Institute with Rep. John Lewis, a close friend and Georgia Democrat.

Staying true to his political approach, Houghton began to organize bipartisan retreats for politicians and their families “so that they could get to know each other on a human level, beyond the inflexibility of what politics has become," his obituary said.

Born in Corning on Aug. 7, 1926, his political blood ran deep. His grandfather, Alanson Bigelow Houghton, was a member of Congress, served as ambassador to Germany under President Warren G. Harding and to Britain under Calvin Coolidge, and was president of Corning. His father, Amory Houghton Sr., would become president and chairman of Corning and later ambassador to France under President Dwight D. Eisenhower. Houghton's mother, Laura Richardson, a native of Providence, Rhode Island, was a philanthropist and former chairwoman of the Girl Scouts of America.

The soon-to-be glass magnate served in the Marine Corps during World War II and later received both a bachelor’s degree and MBA from Harvard. He began working at Corning as an engineer soon after and rose to the roles of chairman and chief executive in 12 years. He served as CEO from 1964 to 1983.

Houghton’s first marriage, to Ruth West, ended in divorce. His second wife, Priscilla Blackett Dewey, died in 2012. They had been married for 22 years.

Houghton is survived by two daughters, two sons, nine grandchildren, a great-grandson and a brother.

He remained vocal about politics after leaving Congress and often commented on divisiveness within the House and among Americans. He was also critical of President Donald Trump.

“The pendulum swings back and forth in life — and it sure does in politics,” Houghton told The Leader, a newspaper in Corning, in 2017. “But you have to have somebody that’s willing to fix it. Or a group of people who are.”