China Says US Must Cut Tariffs in Trade Deal

Beijing appears to be sticking to its position ahead of another possible duty increase. 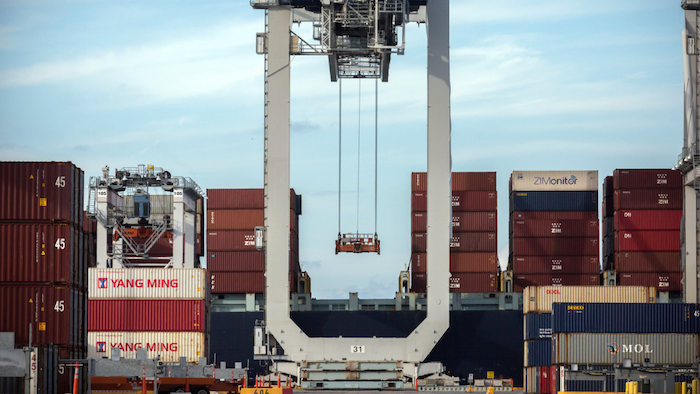 In this July, 5, 2018, file photo, a ship to shore crane prepares to load a 40-foot shipping container onto a container ship in Savannah, Ga.
AP Photo/Stephen B. Morton, File

BEIJING (AP) — Washington must roll back punitive tariffs on Chinese imports if the two sides reach a trade deal, China said Thursday, indicating Beijing is sticking to its position ahead of another possible Dec. 15 duty increase.

The two sides are negotiating details of a “Phase 1” agreement announced by President Donald Trump in October. Beijing said last month the U.S. side agreed to roll back some tariffs, but Trump dismissed that.

“China believes that if the two parties reach a ‘Phase 1’ agreement, tariffs should be reduced accordingly,” said a Commerce Ministry spokesman, Gao Feng.

Gao said negotiators are in “close communication” but he had no other details.

The two sides have raised tariffs on billions of dollars of each other’s imports in the fight over Beijing’s technology ambitions and trade surplus. That has disrupted global trade and threatens to chill economic growth.

Washington is due to raise tariffs on an additional $160 billion of Chinese imports on Dec. 15, including smartphones and toys. That will extend penalties to almost everything the United States buys from China.

Global financial markets tumbled this week after Trump cast doubt on whether an agreement can be reached this year.

Details of the Oct. 12 agreement have yet to be released. But it doesn’t address basic disputes about trade, Chinese industrial subsidies and technology policy.

Economists say a final settlement is unlikely this year. Some express skepticism the two sides can complete the “Phase 1” deal.