The French president said the failed takeover of a Whirlpool plant in Amiens was “not the state’s fault.” 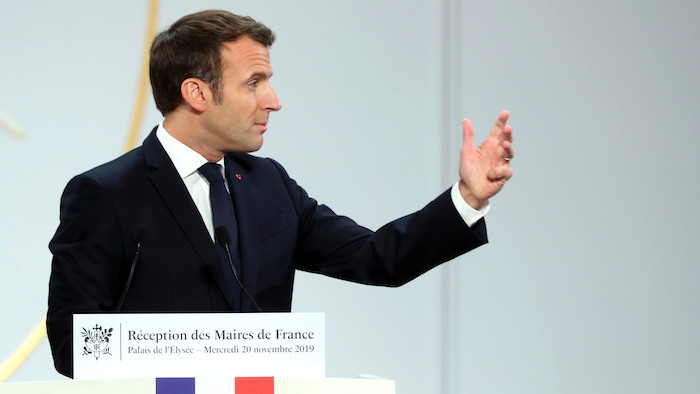 PARIS (AP) — A defiant French President Emmanuel Macron has told laid-off employees at a troubled French appliance factory that his government should not be held responsible for job losses after a takeover there failed.

On a two-day visit to his hometown of Amiens, the French leader sought to show that he’s paying more attention to struggling workers, one year after the yellow vest movement erupted against his government policies, which were seen as favoring the rich.

In a blunt moment seized upon by French media, Macron said Friday that the failure of the takeover at the Whirlpool plant in Amiens — a blue-collar battleground with his 2017 far-right election rival Marine Le Pen — was “not the state’s fault.”

At the time, Macron told workers to trust the company that took over the factory but it later went bust. A second takeover then left more than 100 workers unemployed.

Macron acknowledged a “failure” but stressed that the government is not responsible for firing workers.

“I believed in it (the project) too,” he said, vowing to keep looking for solutions to help the plant’s former employees.

Leftist lawmaker Francois Ruffin, elected in the Amiens’ region, told reporters that he feels “a huge gap between peoples’ ordinary lives and the president’s comments.”

Ruffin said people have concerns because “they are told they are too old, they can’t find a job, they are constantly looked upon with contempt. And the president is telling them from afar ‘We’re going to take care of this, don’t worry.’”

France's unemployment rate has decreased this year to its lowest level in a decade, but at 8.6% it still remains among the highest in the European Union.

Later Friday, Macron spent long moments with the crowd in a popular neighborhood of Amiens, shaking hands and taking selfies with people.

In Amiens, he also visited the university and a facility allowing people to get easier access to public services like the health care system and unemployment benefits.

Macron has been trying to stymie the far-right’s appeal to blue-collar workers ahead of France’s municipal elections in 2020 and the country’s presidential vote in 2022.