They have have grown rabbit and cow muscle cells on edible gelatin scaffolds. 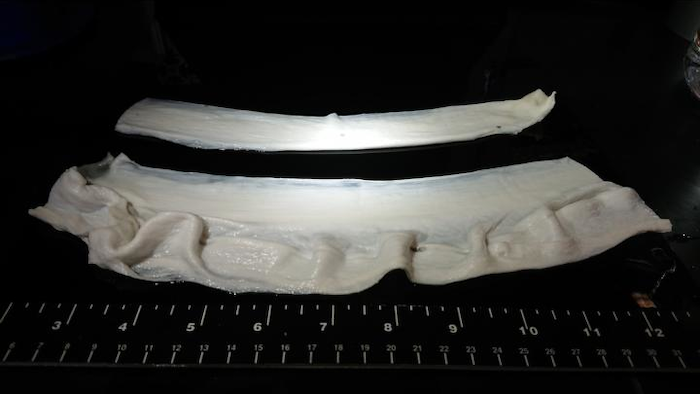 Gelatin fibers produced by 'immersion rotary jet spinning', a fiber production system inspired by cotton candy. These fibers form the 'base' to grow cells in -- they mimic natural muscle tissue's extracellular 'glue', which holds the tissue together and contribute to its texture.
Harvard University

Lab-grown or cultured meat could revolutionize food production, providing a greener, more sustainable, more ethical alternative to large-scale meat production. But getting lab-grown meat from the petri dish to the dinner plate requires solving several major problems, including how to make large amounts of it and how to make it feel and taste more like real meat.

Now, researchers at the Harvard John A. Paulson School of Engineering and Applied Sciences (SEAS) have grown rabbit and cow muscles cells on edible gelatin scaffolds that mimic the texture and consistency of meat, demonstrating that realistic meat products may eventually be produced without the need to raise and slaughter animals.

The research is published in Nature Science of Food. 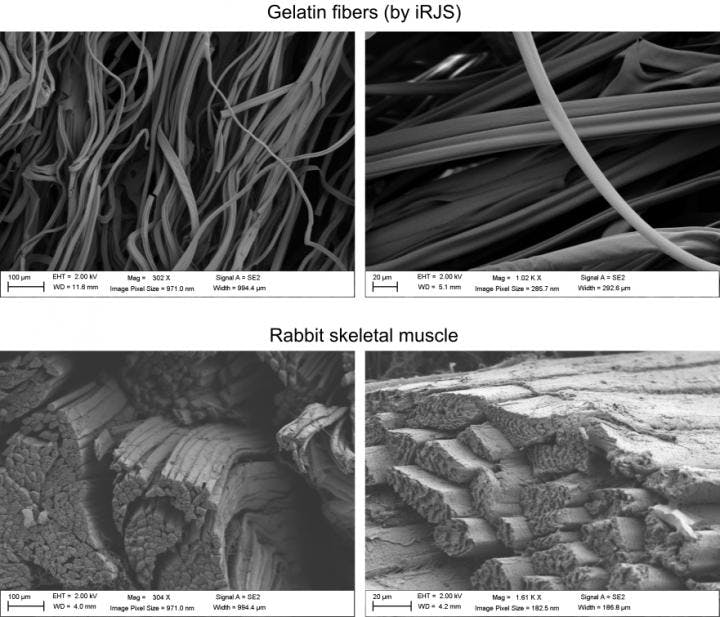 Kit Parker, the Tarr Family Professor of Bioengineering and Applied Physics at SEAS and senior author of the study, began his foray into food after judging a competition show on the Food Network.

"The materials science expertise of the chefs was impressive," said Parker. "After discussions with them, I began to wonder if we could apply all that we knew about regenerative medicine to the design of synthetic foods. After all, everything we have learned about building organs and tissues for regenerative medicine applies to food: healthy cells and healthy scaffolds are the building substrates, the design rules are the same, and the goals are the same: human health. This is our first effort to bring hardcore engineering design and scalable manufacturing to the creation of food."

Animal meat consists mostly of skeletal muscle (and fat tissue) which grow in long, thin fibers -- as can be seen in the grain of a steak or when shredding pork or chicken. Reproducing these fibers is one of the biggest challenges in bioengineering meat.

"Muscle cells are adherent cell types, meaning they need something to hold onto as they grow," said Luke Macqueen, first author of the study and postdoctoral fellow at SEAS and the Wyss Institute for Bioinspired Engineering. "To grow muscle tissues that resembled meat, we needed to find a 'scaffold' material that was edible and allowed muscle cells to attach and grow in 3D. It was important to find an efficient way to produce large amounts of these scaffolds to justify their potential use in food production."

To overcome these challenges, the researchers used a technique developed by Parker and his Disease Biophysics Group known as immersion Rotary Jet-Spinning (iRJS), which uses centrifugal force to spin long nanofibers of specific shapes and sizes. The team spun food-safe gelatin fibers to form the base for growing cells. The fibers mimic natural muscle tissue's extracellular matrix - the glue that holds the tissue together and contributes to its texture.

The team seeded the fibers with rabbit and cow muscle cells, which anchored to the gelatin and grow in long, thin structures, similar to real meat. The researchers used mechanical testing to compare the texture of their lab-grown meat to real rabbit, bacon, beef tenderloin, prosciutto and other meat products.

"When we analyzed the microstructure and texture, we found that, although the cultured and natural products had comparable texture, natural meat contained more muscle fibers, meaning they were more mature," said Macqueen. "Muscle and fat cell maturation in vitro are still a really big challenge that will take a combination of advanced stem cell sources, serum-free culture media formulations, edible scaffolds such as ours, as well as advances in bioreactor culture methods to overcome."

Still, this research shows that full lab-grown meat is possible. 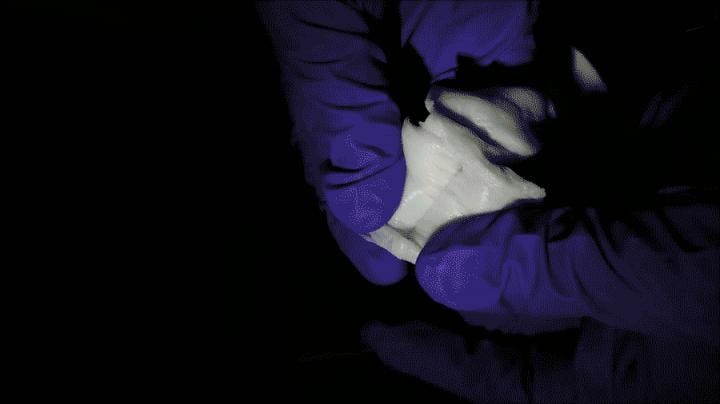 "Our methods are always improving and we have clear objectives because our design rules are informed by natural meats. Eventually, we think it may be possible to design meats with defined textures, tastes, and nutritional profiles - a bit like brewing," said Macqueen.

"The development of cultured meat involves a number of technical challenges, including the formulation of a scaffold material that can successfully support cells and the development of cell lines that are amenable to cultivation for consumption at scale," said Kate Krueger, Research Director at New Harvest, a cellular agriculture research institution, who was not involved in the research. "The authors of this publication have developed scaffold materials that show great promise in these areas."