This new process could transform today's plastic factories into recycling refineries within the framework of their existing infrastructure. 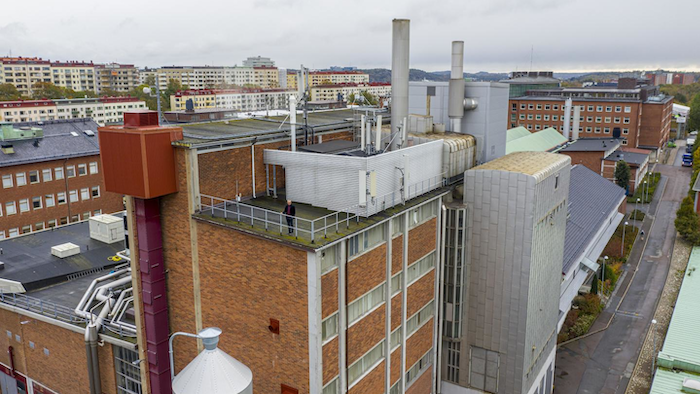 Henrik Thunman on the roof of Chalmers Power Central, an advanced research facility focusing on carbon capture and conversion of biomass and waste.
Johan Bodell/Chalmers University of Technology 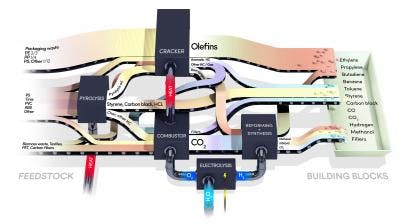 The technology system that makes circular use of plastics possible, connecting all carbon-based materials of both fossil and biogenic origin.Illustration: BoidA research group at Chalmers University of Technology, Sweden, has developed an efficient process for breaking down any plastic waste to a molecular level. The resulting gases can then be transformed back into new plastics - of the same quality as the original.

The new process could transform today's plastic factories into recycling refineries, within the framework of their existing infrastructure.

The fact that plastics do not break down, and therefore accumulate in our ecosystems, is one of our major environmental problems. But at Chalmers, a research group led by Henrik Thunman, Professor of Energy Technology, sees the resilience of plastic as an asset. The fact that it does not degrade makes it possible for circular usage, creating a true value for used plastic, and therefore an economic impetus to collect it.

"We should not forget that plastic is a fantastic material - it gives us products that we could otherwise only dream of. The problem is that it is manufactured at such low cost, that it has been cheaper to produce new plastics from oil and fossil gas than from reusing plastic waste," says Henrik Thunman.

Now, through experimenting with chemical recovery via steam cracking of plastic, the researchers have developed an efficient process for turning used plastics into plastics of virgin quality.

"Through finding the right temperature - which is around 850 degrees Celsius - and the right heating rate and residence time, we have been able to demonstrate the proposed method at a scale where we turn 200 kg of plastic waste an hour into a useful gas mixture. That can then be recycled at the molecular level to become new plastic materials of virgin quality," says Henrik Thunman.

The experiments were carried out at the Chalmers Power Central facility in Gothenburg.

The new technology and Chalmers researcher's vision of a sustainable, circular and renewable recycling system is presented in three illustrations.Illustrations: Boid

In 2015, around 350 million tonnes of plastic waste were generated worldwide. In total, 14 percent was collected for material recovery - 8 percent was recycled into plastic of lower quality, and 2 percent to plastics of similar quality as the original. Around 4 percent was lost in the process.

Overall, around 40 percent of global plastic waste in 2015 was processed after collection, mainly through incineration for energy recovery or volume reduction - releasing carbon dioxide into the atmosphere.

The rest - about 60 percent - went to landfill. Only around 1 percent was left uncollected and leaked into natural environments. Though only a small percentage, this nevertheless represents a significant environmental problem, since the amount of plastic waste is so high overall, and since the natural degradation of plastic is so slow, it accumulates over time.

The current model for recycling plastic tends to follow what is known as the 'waste hierarchy'. This means the plastic is repeatedly degraded, to lower and lower quality before finally being burned for energy recovery.

"Instead of this, we focused on capturing the carbon atoms from the collected plastic and using them to create new plastic of original quality - that is, back to the top of the waste hierarchy, creating real circularity."

Today, brand new plastics are made by shattering fossil oil and gas fractions in a device known as a 'cracker' in petrochemical plants. Inside the cracker, building blocks consisting of simple molecules are created. These can then be combined in many different configurations, resulting in the enormous variety of plastics we see in our society.

To do the same from collected plastics, new processes need to be developed. What the Chalmers researchers now present are the technical aspects of how such a process could be designed and integrated into existing petrochemical plants, in a cost-effective way. Eventually, this kind of development could enable a hugely significant transformation of today's petrochemical plants into recycling refineries of the future.

The researchers are continuing their work on the process.

"We are now moving on from the initial trials, which aimed to demonstrate the feasibility of the process, to focusing on developing more detailed understanding. This knowledge is needed to scale up the process from a few tonnes of plastic a day, to hundreds of tonnes. That is when it becomes commercially interesting," says Henrik Thunman.

More about: The Chalmers researchers' method and its potential:

The process is applicable to all types of plastic that result from our waste system, including those that have historically been stored in landfills or at sea.

What makes it now feasible to use collected and sorted plastics in large-scale petrochemical plants is that a sufficient volume of material is collected, meaning that the plants can theoretically maintain the same output. These plants require around 1-2 million tonnes of sorted plastic waste per year to convert to match the production levels they currently derive from oil and fossil gas.

Sweden's total amount of plastic waste in 2017 was around 1.6 million tonnes. Only around 8 percent of that was recycled to lower quality plastics.

The Chalmers researchers therefore see an opportunity to create a circular use of plastic in society, as well as free us from the need for oil and fossil gas to produce various high-quality plastics.

"Circular use would help give used plastics a true value, and thus an economic impetus for collecting it anywhere on earth. In turn, this would help minimise release of plastic into nature, and create a market for collection of plastic that has already polluted the natural environment, says Henrik Thunman.

End-of-life bio-based materials like paper, wood and clothes could also be used as raw material in the chemical process. This would mean we could gradually reduce the proportion of fossil materials in plastic. We could also create net negative emissions, if carbon dioxide is also captured in the process. The vision is to create a sustainable, circular system for carbon-based materials.