Chinese Envoy Heads to US to Prep for Trade Talks

A Chinese envoy will head to Washington on Wednesday to prepare for trade negotiations. 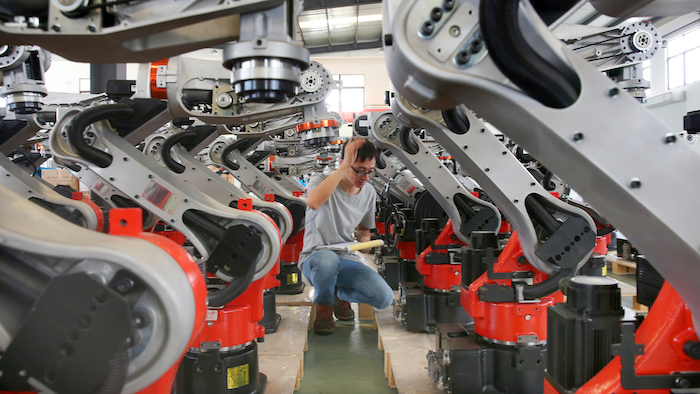 In this Wednesday, Sept. 11, 2019, photo, a man checks on the robotic arms at a factory making industrial robots in Zhengyu town of Haimen city in east China's Jiangsu province. A Chinese envoy is going to Washington on Wednesday, Sept. 18, to prepare for trade negotiations. The announcement Tuesday, Sept. 17, follows conciliatory gestures by both sides ahead of the October talks on their fight over trade and technology, which threatens to dampen global economic growth.
Chinatopix via AP

BEIJING (AP) — A Chinese envoy will head to Washington on Wednesday to prepare for trade negotiations.

The announcement Tuesday follows conciliatory gestures by both sides ahead of the October talks on their fight over trade and technology, which threatens to dampen global economic growth.

A deputy finance minister, Liao Min, will lead a delegation to Washington to "pave the way" for the 13th round of negotiations, the official Xinhua News Agency said. It gave no details of their agenda.

The two governments have raised tariffs on billions of dollars of each other's goods. That has battered farmers and manufacturers on both sides and fueled fears the global economy, which already is showing signs of cooling, might tip into recession.

Beijing announced Friday it will lift punitive tariffs on American soybeans, China's biggest import from the United States. That followed President Donald Trump's decision to postpone a tariff hike on Chinese imports. But there has been no sign of progress on the core issues in their sprawling dispute.

Negotiations between Washington and Beijing broke down in May over how to enforce any deal.

Beijing says Trump's tariff hikes must be lifted as soon as an agreement takes effect. Washington wants to keep some in place to ensure Chinese compliance.

Trump and Chinese President Xi Jinping agreed in June to resume talks but the last round in Shanghai in July produced no progress.

Washington wants Beijing to roll back plans for state-led development of leaders in robotics and other technologies that some American officials worry will erode U.S. industrial leadership.

The World Bank and a Chinese Cabinet agency, in a report issued Tuesday, urged Beijing to open markets and curb subsidies and official involvement in technology industries that it says might hamper development instead of promoting it.

The report on China's fledgling technology was commissioned three years ago, well before the trade war with Trump over trade and Beijing's technology ambitions erupted.

It does not mention the trade war, though it focuses on the same policies that Washington, Europe, Japan and other trading partners say violate Beijing's market-opening commitments.

Critics of those policies complain that they are based on stealing or improperly pressuring foreign companies to hand over technology and shielding Chinese industry from competition.

The report was issued by the World Bank, the Chinese Finance Ministry and the Cabinet's Development Research Center, which represents the most free-market oriented wing of the ruling Communist Party.

It marks the third time the Washington-based bank and the DRC have collaborated on reports urging that the government scale back its role in the state-dominated economy. They have had a limited impact on policy.

"Developing new drivers of growth is becoming more urgent" due to a "complicated international environment" and weakening Chinese economy, a DRC official, Zhang Junkuo, said at a news conference.

The report portrays its recommendations as an extension of the ruling party's market-oriented development plans.

Xi's government, which has waged a crackdown on liberal intellectuals and activist lawyers, has attacked reform advocates who criticize government development plans.

One of China's most prominent economic think tanks, the Unirule Institute in Beijing, announced last month it would shut down after the government banned it after seeking for years to silence its criticism of economic policy.

Xi's government has announced tariff cuts and market-opening measures including allowing full foreign ownership of auto manufacturers for the first time. But it is resisting pressure to discard technology development plans considered to be crucial for prosperity and global influence.

The World Bank report calls on Beijing to "remove distortions and market barriers" and to ensure government policies "supplement market competition instead of supplanting it."

The government should provide a "clear and fair business environment" instead of making commercial decisions, the report said. It calls for faster action in reforms aimed at making state-owned companies more competitive and "greater discipline" in official support to specific industries.

A survey of 500 entrepreneurs in five Chinese cities found they believe the most effective government initiatives improve business conditions and promote competition rather provide direct subsidies or official financing, the report said.