Flood-ravaged farmland and an escalating trade war with China cut into sales. 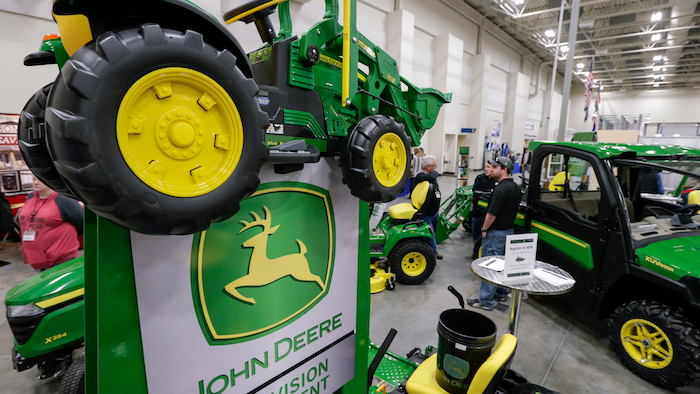 Deere & Co. cut its profit expectations for the second time this year as beleaguered farmers and an escalating trade war with China cut into sales.

Widespread and heavy flooding severely delayed planting this year for thousands of farmers. In the 18 states that grow most of the nation's corn, only 58% of the crop had been planted by the last week of May, far from the 90% in a typical year. Less than half of the normal soybean crop had been planted in that same period, leaving many farmers to decide whether to plant at all.

China this month abruptly cut off purchases of U.S. farm products in protest of tariffs and tariff threats from the Trump administration.

China bought $6 billion in U.S. farm exports last year, according to the U.S. Census. It's the world's biggest soybean buyer and it purchased about 60 percent of U.S. soybean exports in 2018.

Soybean prices have been deteriorating since the trade war began.

Deere now anticipates profits of about $3.2 billion. Its prior outlook was for earnings of $3.3 billion. Deere still foresees a full-year revenue increase of about 5%.

In May, the company lowered its profit expectations from $3.6 billion, and lowered revenue expectations as well.

"Concerns about export-market access, near-term demand for commodities such as soybeans and overall crop conditions have caused many farmers to postpone major equipment purchases," Chairman and CEO Samuel Allen said in a prepared statement.

Sales of agricultural and turf equipment, Deere's biggest operation, slid 6% in the third quarter, and profits fell 24% the company said.

That was partially offset by strong activity in the construction industry. Sales of related equipment rose by a percent and profit rose 35%,

Deere, based in Moline, Illinois, earned $899 million, or $2.81 per share, for the period ended July 28. Excluding certain items, earnings were $2.71 per share, or 9 cents short of per-share projections from industry analysts, according to a survey by Zacks Investment Research.

It was also short of last year's quarterly profit of $910 million.

Revenue fell 3% to $10.04 billion, with adjusted revenue totaling $8.97 billion. That was also short of expectations.

Investors had been bracing for worse, however, given the worsening trade relations and slowing global economy. Shares rose 3% at the opening bell.