Court says state and federal programs are already in place to ensure that companies take financial responsibility for cleanups. 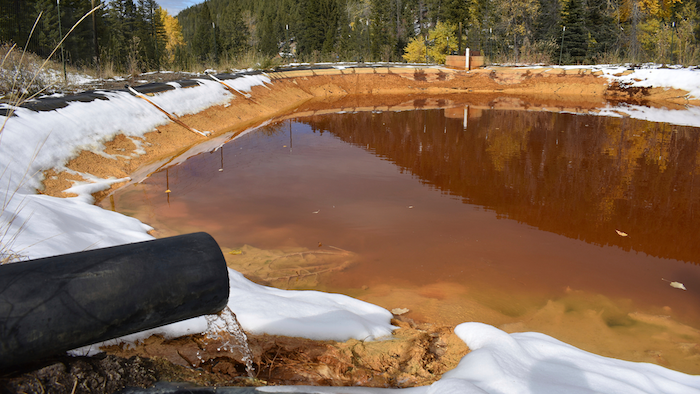 In this Oct. 12, 2018, file photo, water contaminated with arsenic, lead and zinc flows from a pipe out of the Lee Mountain mine and into a holding pond near Rimini, Mont. An appeals court Friday, July 19, 2019, has sided with the Trump administration after it dropped a proposal that would have required mining companies to prove they have the wherewithal to clean up future pollution.
AP Photo/Matthew Brown, File

The ruling came after the administration was sued by environmental groups for dropping an Obama-era proposal that would have forced companies to put up money to show they have resources to clean up pollution.

The mining industry has a legacy of bankrupt companies abandoning polluted sites and leaving taxpayers to cover cleanup costs.

But the three-judge panel with the U.S. Court of Appeals for the District of Columbia Circuit said it was "unpersuaded" by the environmentalists' arguments that the Trump administration relied on a faulty economic analysis in making its decision.

The case began after Environmental Protection Agency said in December 2017 that stricter regulations and modern mining practices have reduced the risks of pollution going unaddressed.

The mining industry and members of Congress from Western states had argued the rule was unnecessary because of existing cleanup requirements already enforced at the state and federal level.

The Associated Press has reported that every day, millions of gallons of water loaded with arsenic, lead and other toxic metals flow from some of the most contaminated mining sites in the U.S. and into surrounding streams and ponds without being treated.

State and federal laws in recent decades have held companies more accountable than in the past. Environmental groups contend huge loopholes all but ensure that some of today's mines will foul waterways or require perpetual cleanups.

"EPA used common sense in its final determination, and we are pleased the court found the agency's reasoning compelling," Quinn said in a statement.

An attorney for Earthjustice, which brought the lawsuit on behalf of the Sierra Club, Earthworks and other groups, said the mining industry "shouldn't be allowed to poison groundwater" and cause other environmental problems.

"The Trump administration has this proposal at the top of its deregulatory agenda," attorney Jaimini Parekh said. "By taking no action they're giving a huge subsidy to the mining industry at the cost of our public health, our rivers and our hard-earned taxpayer dollars."

The proposal had been announced in the last days of the Obama administration, on Jan. 11, 2017. Documentsreleased by the EPA to Earthjustice under a public records request show Trump administration officials recommended taking no action on it as early as February 2017, while a public comment period was still underway.

Hard-rock mining companies would have faced a combined $7.1 billion financial obligation under the rule, costing them up to $171 million annually to set aside sufficient funds to pay for future cleanups, according to an EPA analysis.

"In signing the final action in December 2017, EPA was confident that modern industry practices, along with existing state and federal requirements, addressed risks from hardrock mining," Sauerhage said in a statement.

Since 1980, at least 52 mines and mine processing sites had spills or other releases of pollution, according to documents previously released by the EPA.

But Friday's ruling noted that the "vast majority" of EPA spending on hardrock mining cleanups involved contamination from legacy mines, not ongoing operations.

The industry's troubles were highlighted in 2015, when an EPA cleanup team accidentally triggered a 3 million gallon (11 million liter) spill of contaminated water from Colorado's inactive Gold King mine, tainting rivers in three states with heavy metals including arsenic and lead.

The prospect of new financial rules for mining emerged from a broader EPA review of several polluting industries that was mandated under a court order in a separate case.

On July 2, EPA administrator Andrew Wheeler said the agency does not intend to impose new rules on electric utilities to show they have money to clean up hazardous spills from power plants . Preliminary decisions for the two remaining industries, chemical manufacturing and oil refineries, are expected in December, EPA officials said.