The U.S. Fish and Wildlife Service warned that some damage to the nearby Okefenokee Swamp may be irreversible. 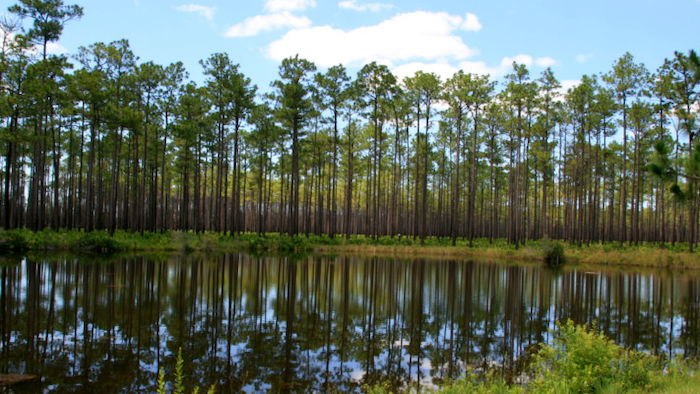 SAVANNAH, Ga. (AP) — The federal agency that manages the vast wildlife refuge in the Okefenokee Swamp says a private company's plan to mine minerals near the swamp edge could pose "substantial risks" to the environment, and some damage may be irreversible.

The written comments from the U.S. Fish and Wildlife Service were provided to The Associated Press on Friday by the Army Corps of Engineers, which disclosed last week that it is considering a permit request by the mining company Twin Pines Minerals LLC of Birmingham, Alabama.

The company wants to mine titanium dioxide less than 4 miles (6.4 kilometers) from the Okefenokee National Wildlife Refuge. It's the largest federal refuge east of the Mississippi River, covering nearly 630 square miles (1,630 square kilometers) near the Georgia-Florida state line.

"We have concerns that the proposed project poses substantial risks for significant affect to the environment," the Fish and Wildlife Service wrote in a five-page response to the Army Corps dated Feb. 20. "Should impacts occur they may not be able to be reversed, repaired, or mitigated for."

The memo five months ago listed "preliminary concerns" with the mining proposal, said Mark Davis, a Fish and Wildlife Service spokesman in Atlanta. He said the agency is still reviewing the plan.

"Are those still our concerns? The answer is yes," Davis said Friday.

Since 1937, federal protection has ensured the Okefenokee Swamp remains largely unspoiled. Its tea-colored waters, cypress forests and flooded prairies serve as habitat to alligators, bald eagles and other protected species. About 600,000 people visit each year, according to the Fish and Wildlife Service, which manages the refuge.

A similar mining plan near the Okefenokee was abandoned 20 years ago by chemical giant DuPont amid staunch opposition from environmentalists as well as the administration of then-President Bill Clinton. Interior Secretary Bruce Babbitt visited the refuge in April 1997 to declare his opposition.

The Fish and Wildlife memo says mining at the swamp's edge could affect its entire expanse. It quotes Babbitt as having said: "Titanium is a common mineral, while the Okefenokee is a very uncommon swamp."

The titanium dioxide that Twin Pines Minerals wants to mine is primarily used to produce white pigment for paints and paper.

The company's application seeks permits to mine on a sandy ridge that serves as the eastern edge of the giant bowl-like depression that holds water in the swamp. Twin Pines Minerals' plan initially calls for mining on about 4 square miles (10 square kilometers), but the company said it eventually wants to expand to about 19 square miles (49 square kilometers).

"We really took their questions and comments to heart and tried to incorporate their comments and concerns in our program," Ingle said.

He added the company has since conducted environmental studies that it believes will "prove that during mining, and after mining, we will be very much environmentally friendly."

The Fish and Wildlife memo said it's unknown how mining deep into the sandy soil might alter the ridge's "water holding and water movement characteristics." That's because the soil will lose its distinct layers after it's scooped at average depths of 50 feet (15 meters). Once minerals are removed, the soil will be returned to the ground as a homogenized mixture.

"This will likely change its properties and the hydrology of the area," the document said. The name of its author was redacted by the Army Corps.

The agency said it's also concerned about whether the mixed-up soil might affect the ability of protected species, including gopher tortoises and indigo snakes, to live in underground burrows.

"After the mining, it is questionable if the site will serve as habitat for either species ever again," the Fish and Wildlife memo said.