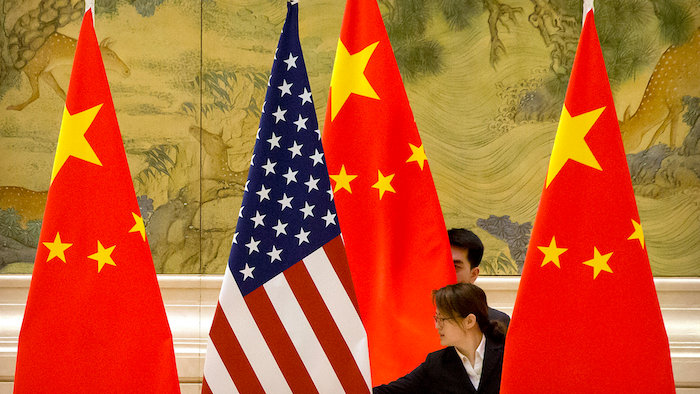 In this Feb. 14, 2019, file photo, Chinese staffers adjust U.S. and Chinese flags before the opening session of trade negotiations between U.S. and Chinese trade representatives at the Diaoyutai State Guesthouse in Beijing. Beijing on Friday, June 28, 2019, criticized what it calls "negative content" about China in legislation before the U.S. Congress, saying it would further damage relations already roiled by disputes over trade and technology.
AP Photo/Mark Schiefelbein, File

BEIJING (AP) — Beijing on Friday criticized "negative content" about China in legislation before the U.S. Congress, saying it would further damage relations already roiled by disputes over trade and technology.

"We express firm opposition to the U.S. Senate's approval of the act containing negative content related to China," Geng told reporters at a daily briefing. "Once the act becomes a law, it will damage China-U.S. relations and disrupt bilateral cooperation in some important areas."

Geng's comments came a day before President Donald Trump is to meet his Chinese counterpart, Xi Jinping, at the G-20 summit in Osaka, Japan, amid hopes the leaders will call a truce in the ongoing disputes.

"We hope that the U.S. can meet China halfway and work together with us to promote a positive result of the meeting," Geng said. "This is in the interest of both countries and also meets the common expectation of the international community."

The U.S. accuses Beijing of stealing technology and forcing foreign companies to hand over trade secrets as part of a drive to end America's technological supremacy.

Trump has already imposed 25% tariffs on $250 billion in imports from China and is threatening to tax an additional $300 billion worth, covering virtually everything China exports to the United States. China has retaliated by imposing tariffs on $110 billion in U.S. imports.

Negotiations on a resolution have been stalemated since last month after the administration accused Beijing of backtracking on previous commitments.

While the sides are hoping Trump and Xi can agree to some kind of truce in Osaka, the odds of an enduring agreement being reached are considered low.